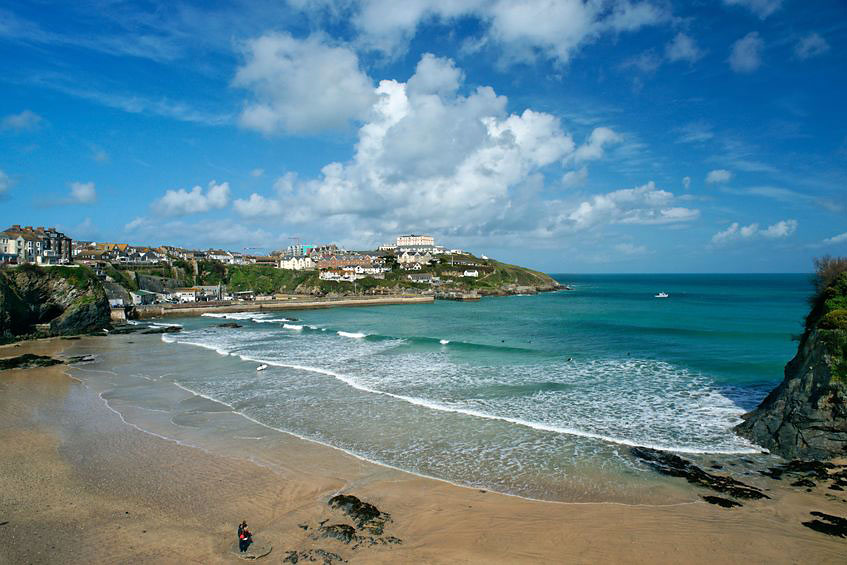 Newquay was originally the fishing port of Towan Blistra before the new quay was built in the fifteenth century. Among other things, the quay was used for the import of coal and the export of mined ore during the heyday of the tin and copper mining industries. For many years, the main industry was pilchard fishing and salting. Even before this, it was the site of an Iron Age fort. Although the pilchards disappeared long ago, there are still a few boats fishing from Newquay and there are plenty of pleasure craft here as well. Another intersting throwback to the days when pilchard fishing was the towns lifeblood is the Huer's Hut located high above the harbour. It's a perculiar little round white hut with steps leading up to the roof where the huer would stand and cry, 'Hevva, Hevva!', when pilchards were sighted.

These days Newquay is the resort with all the nightlife (but not so much of the culture!). However, there is the Lane Theatre, the only theatre in Newquay, which has recently been expanded and refurbished with funding from the National Lottery through the Arts Council. It seats 138, has a licensed bar, facilities for the disabled and a free car park. Comedy plays are presented throughout the summer season.

Newquay is famous for the Boardmasters surfing championships, held at Fistral Beach, which attract competitors from all over the world. The main town beaches are Towan, Great Western, Lusty Glaze and Tolcarne, all of which are reasonably sheltered and safe for swimming and sun-worshipping. There is an aquarium on the promenade of Towan Beach.

Every season a free newspaper is published, containing features of local interest and a What’s On guide. The summer months feature such events as a balloon festival, gig-racing for both men and women’s teams, surfing and surf life-saving events and championships and the RNLI Lifeboat Day.

More than 250,000 people visit Newquay Zoo each year. The zoo is set in over ten acres of sub-tropical lakeside gardens. Many of the World's endangered species can be seen. There are red pandas, black apes, zebra, antelope and many other exotic creatures. There is also the Village Farm, home to rats, barn owls, goats, rabbits, chickens, pot bellied pigs and other species.

The beautiful beaches and the spectacular coastal scenery have made Newquay was it is today - Cornwall's premier resort. There is always plenty going on during the summer months and it is an ideal venue for young people. Nowadays, regular flights from London to the local airport make the town highly accessible.

The surrounding countryside is very attractive and there are lots of places to walk, in addition to the coastal footpath from which you may be rewarded with an occasional glimpse of dolphins. There are several stately homes worth visiting and various theme parks and leisure activities for those with young families. Waterworld, the local leisure centre, features two swimming pools and a fitness gym.

The Lappa Valley Steam Railway runs along one of Cornwall's oldest stretches of rail, built in 1849 to carry ore from the mine at East Wheal Rose to Newquay Harbour. Much later it was part of the Great Western Railway. Spring is the best time to travel on the railway, as the wild flowers at the sides of the track are at their best.