Bodmin is the former county town of Cornwall. It was the only Cornish town to be recorded in the Domesday Book, which was actually lodged in the town’s prison during the First World War. The name is derived from Bod-minachau, meaning the home of monks, suggesting that it was originally a religious settlement. The entry in the Domesday Book records that the town was held by St Petroc’s Church and that there were 68 houses and a market in the 11th century.

The church was originally a Norman construction, although it was extensively rebuilt in the 15th century and restored again in the 19th century. In addition there was a large Abbey of Bodmin, of which only a few fragments and a fishpond survive today. 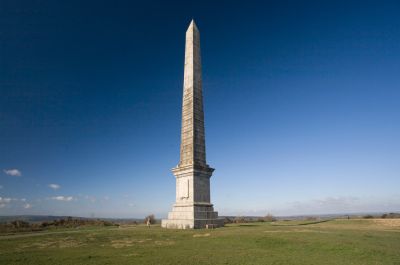 Bodmin Beacon
The oldest part of the town is composed of mainly granite buildings clustered around the towering Bodmin Beacon atop a windswept hill to the south of the town. The Beacon is a 144 feet tall obelisk in memory of Sir Walter Raleigh Gilbert, a local town dignitory born in Priory House. It was erected in 1856 in recognition of his service in India. The area around the Beacon was declared a Local Nature Reserve in 1994 with woodland and traditional hay meadow.

The county prison is now a museum open to the public. Bodmin Gaol was built in 1778, replacing the Debtor's Prison. It was the first prison in the country to have separate cells rather than communal accommodation. The jail was rebuilt twice in the following 100 years to cope with the increasing population of the town. Over the years there were 55 hangings in the prison, 51 of which were public - it was in fact the site of the last public hanging in Britain. in 1909. Bodmin Gaol closed in 1922.

The town expanded in the sixties and seventies, when people from the South East of England were re-housed in the area. This has given Bodmin a more 'cosmopolitan' atmosphere.

Bodmin was the county town of Cornwall for many years and the home of the County Assizes. However, the courts have now moved to Truro and the Shire Hall is now the Tourist Information Centre. There are also several interesting exhibitions within the building.

Visitors arriving by train at Bodmin Parkway can catch a steam train for the short journey into town. The Bodmin & Wenford Railway opened in 1990 and restored this link to the town. It is also possible to link up with the Camel Trail at Boscarne Junction to enjoy the old scenic railway route. Not far from the station is the Military Museum. 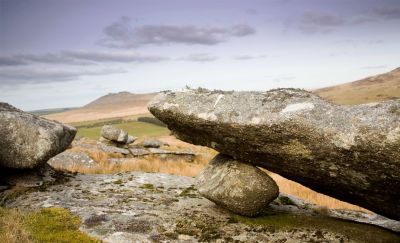 Garrow Tor, Bodmin Moor
Although Bodmin Moor abviously derives its name from Bodmin the town barely touches the western fringe of the moor. Most people are probably familiar with Bodmin Moor from the works of  Daphne du Maurier and, at Jamaica Inn, there is a small museum commemorating the author. In nearby St Neot’s Church are some interesting fifteenth century stained glass windows, and not too far from there are the Carnglaze Slate Caverns. The Moor boasts several ancient stones and offers the possibility of a glimpse of the renowned Beast of Bodmin.

There are many interesting walks and nature trails on the moor, including a stroll to the top of Brown Willy, the high point of Bodmin Moor at more than 1,300 feet. Rough Tor is the second highest point and is worth the climb for the view from the top. Other leisure activities available in the area include water sports on Siblyback Lake. 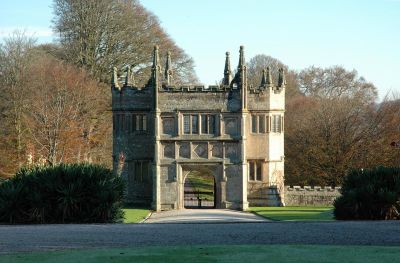 Lanhydrock gatehouse
Pencarrow, a privately owned Georgian house, and the late nineteenth century National Trust property, Lanhydrock, are both worth a visit. The latter also boasts a popular golf course.

Scarlet's Well is said to possess unusual iridescent water which was thought to cure just about everything! Another well can be found at St Neot but this one is only effective on the first three days of May. Of course there are numerous ancient sites on and around Bodmin Moor and details of these can be found elsewhere on this site.