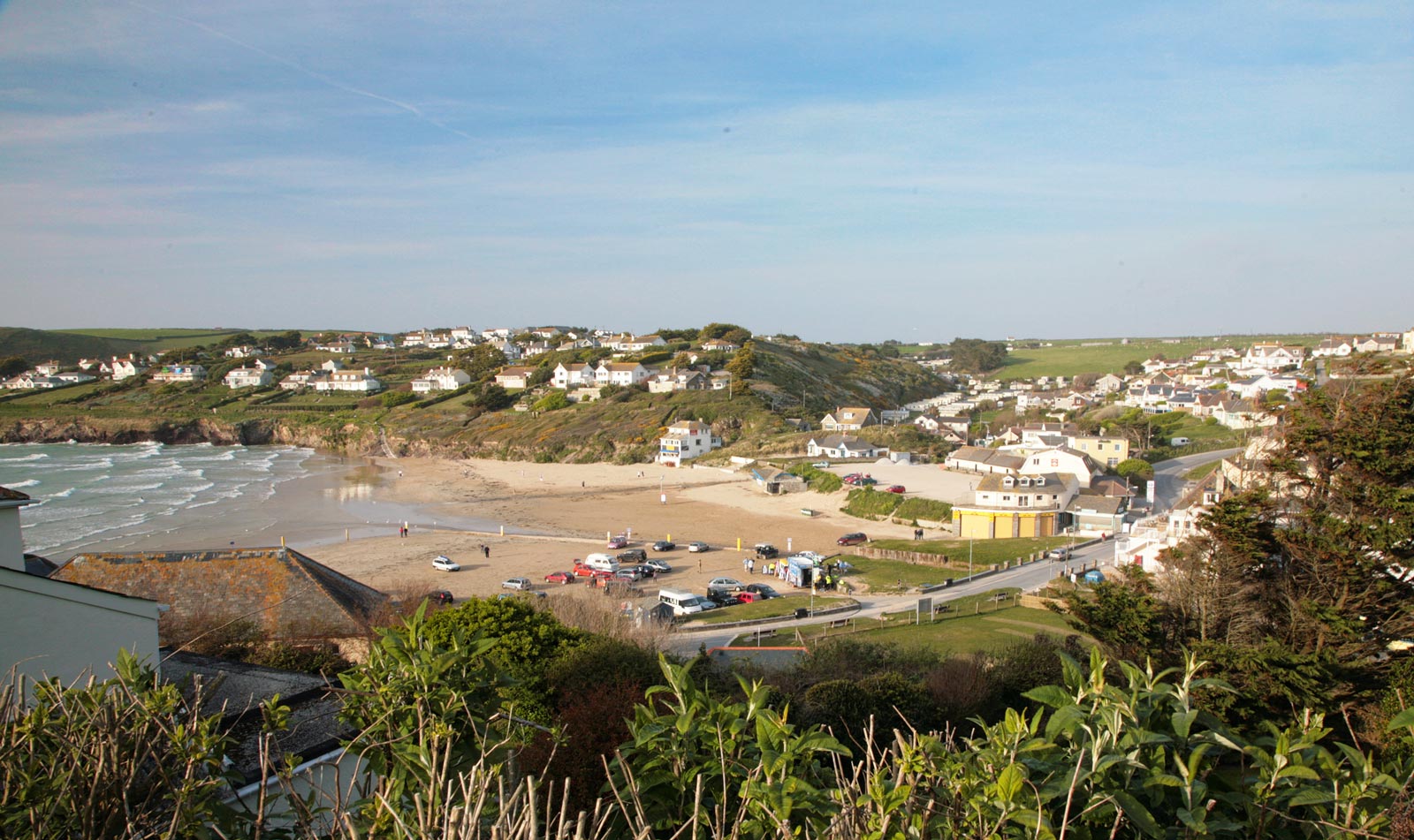 Polzeath is a small village on the headland opposite Padstow. It was a favourite haunt place of the late poet laureate, Sir John Betjeman and is celebrated in some of his verse. There are many local shops, providing everything required for the holidaymaker. Within the village are a number of pubs, cafés and restaurants.

Polzeath is a haven for surfers (or at least wanna be surfers!) and beach lovers. There are lifeguards on the beach during the daytime in the season. Bathers should be aware that the cliffs can be particularly dangerous in bad weather. Although generally a safe beach, there can be large surf with rips and children should not be allowed in the water with inflatables. This is a sand and shingle beach, situated at the mouth of a river and backed by interesting cliffs. There is a nature reserve and some interesting rock pools on the beach. Dolphins may sometimes be spotted and this is a good area for many types of coastal bird including puffins. The beach more or less disappears at high tide and the car park may disappear too in very stormy conditions! During the season, Polzeath Beach car park is packed with Range Rovers and Audis from the yuppie resort of Rock around the corner.

The coastal path passes through Polzeath in one direction to Daymer Bay and Rock, and in the other through New Polzeath, Pentire Point and along miles of stunning coastline. Past a large slate seat is the hulking sheer cliff west of The Rumps. Looking back to the left is Newlands Island. On the unusually shaped double headland of The Rumps is the Iron-Age cliff castle. This promontory fort with superb coastal vistas has a massive triple rampart and ditch system protecting an area of around 6 acres at the tip of the headland. Several hut circles lie within the enclosure. Excavations have unearthed pottery from the first century BC and indicate trade with the Mediterranean area. Near the promontory, may be seen signs of the caves at Guglane, just below the ramparts. The large offshore rock behind the eastern headland is The Mouls, a breeding site for puffins, gannets and kittiwakes. Further on, there is a 19th century folly at Doyden Castle. It is possible to walk to Port Quin, where there is a car park.

Both Daymer Bay and Trebetherick, with their fine bathing and surfing beaches, have a huge appeal to families. This is exhilarating and magnificent country, with wide open, peaceful spaces in which to be at one with nature. Within easy walking distance of the beach at Daymer is St Enodoc Church, which was once buried in the sand. This is where Sir John Betjeman is buried. Daymer Bay is popular with windsurfers and the rock pools also appeal to small children with buckets and spades.

The coastal footpath between Polzeath and St Enodoc is suitable for wheelchair users, offering an opportunity for all to appreciate the stunning scenery of the estuary.

There are many sports and leisure facilities in the area, including a couple of golf courses.