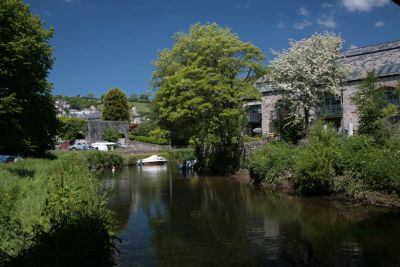 Lostwithiel is situated in a beautiful wooded valley at the tidal reach of the River Fowey. Located in central Cornwall, it is within easy reach of both coasts and the moors and is well placed for exploring the county. The name comes from two Cornish words meaning the place at the end of the woodland.

The town was founded by the Normans for the export of tin about 800 years ago. At that time, the river was wide and deep and ships tied up along the quay to load tin destined for many European ports. The town became the second busiest port on the south coast of England.

By the 13th century Lostwithiel had become the county capital. It was the administration centre for county affairs and Cornwall's main stannary town. Ironically, tin, which was the original source of the wealth of the town, eventually caused its decline. Rubble, from the mines on the moors, silted up the river, restricting the size of vessels that could use the quay.

The church of St Bartholomew is fairly distinctive owing to its 14th century spire featuring a Breton influence. The main church and tower are of 13th and early 14th cenury construction but the tower has been extended with an octagonal spire cleverly grafted on.
The rest of the church is not outstanding but the great east window is one of the finest in Cornwall

The town was badly damaged during the Civil War, when it was occupied by Parliamentary soldiers and besieged by Royalists in 1644. Much of it was rebuilt in the late 17th century. The mediaeval church, bridge and the Duchy Palace are remnants of the original splendour of the town.

Today there are numerous antique shops selling furniture, collectibles, ceramics and such things. Other shops, hidden in the old streets, specialise in arts and crafts, paintings, lace and patchwork. The museum is in the former Corn Exchange and has an interesting collection reflecting life in Lostwithiel over the past centuries. The local library is in a restored mediaeval house. It has an excellent selection of books on Cornwall and there are often exhibitions in the upstairs gallery.

The approach to the old town of Lostwithiel, by river, rail or road is through some of the loveliest scenery. There is plenty of accommodation in and around the town, including everything from hotels to self-catering accommodation. The town also has many restaurants, cafés and pubs.

Restormel Castle, the home of the Norman lords who built the town, belongs to the Duchy of Cornwall. It overlooks the river valley a mile upriver from Lostwithiel. It was rebuilt by Edmund, Earl of Cornwall in the late 13th century. The bailey has now disappeared, and there is no longer any trace of the large deer park. The Black Prince lived here briefly in 1354. The castle is open to the public and the views from the top of the castle wall are magnificent.

St Winnow is a tiny hamlet where there is an interesting Farm Museum. The old church has some outstanding stained glass windows and interesting bench ends. It was used in the filming of a wedding for Poldark. Another pretty village is Lerryn, on a tidal creek of the River Fowey. The bridge was rebuilt by order in 1573 and the water may be crossed by stepping stones at low tide. The river is also said to have been the inspiration for Kenneth Graham's The Wind in the Willows.

Charles I stayed at nearby Boconnoc during the Siege of Lostwithiel in August 1644. Boconnoc still has a deer park, and the gardens are occasionally open to the public. Another local village, Luxulyan, is known for its granite viaduct, supported by ten arches and originally carrying a stream, path and light railway for 700 feet at a height of nearly 100 feet.

The tower of St Brevita’s Church in Lanlivery has been a landmark for sailors for centuries. Lanlivery is on The Saints’ Way, a route across Cornwall linking Padstow and Fowey. It was used in the Dark Ages by Celtic holy men travelling between Ireland, Wales and France and is marked by a series of crosses, churches, chapels and holy wells dedicated to those early saints. The route was probably in use by merchants long before that. There are also pagan shrines, menhirs and tumuli along the route, dating from at least three thousand years ago.