Mevagissey is an attractive old town which was once the centre of Cornwall’s pilchard fishery and which still boasts a working harbour, with a few dozen small fishing boats. It has a tradition of boat building dating back to 1745. Many of the old buildings, constructed of cob and slate, bear testimony to a time when the large shoals of pilchards were the livelihood of the whole village. Fishing trips can be taken from the harbour and there is a ferry to the nearby port of Fowey. There is a car park on the quay but the narrow streets can be difficult to negotiate and are often full of pedestrians.

The name Mevagissey is derived from the names of two saints, St Meva and St Issey. The first record is of a hamlet of this name in 1313, but there were local settlements in the Bronze Age. Two Bronze Age Burial Urns were discovered at nearby Portmellon. 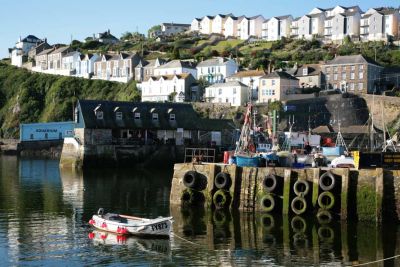 In the narrow streets are many gift shops, craft workshops, galleries, cafés and pubs. There are several hotels and many fish restaurants in Mevagissey and, of course, plenty of fish and chip shops! Many of the latter were once the haunts of Cornish smugglers. The World of Model Railways Exhibition is an impressive collection. There is an excellent Folk Museum, and an aquarium, in the old lifeboat house, displaying locally caught fish.

From the top of Polkirt Hill there is a great view over the higgledy streets, the harbour and the yachting pool. Further out can be seen the golden sands of Polstreath Beach and St Austell Bay. Looking south, there is the inlet sheltering Portmellon Beach and the scenic coastal path over Chapel Point to Gorran Haven.

At the end of June each year, Mevagissey celebrates Feast Week with local entertainments and dancing in the streets. In addition, the town has a wonderful display of Christmas lights. New Year is celebrated by almost everybody wearing fancy dress, as is the tradition in many Cornish towns.
The small town is in a delightful position on an attractive stretch of coastline. The coastal footpath offers some lovely walks but can be fairly steep in places. Mevagissey is also a convenient centre for those wanting to visit such local attractions as the Lost Gardens of Heligan. 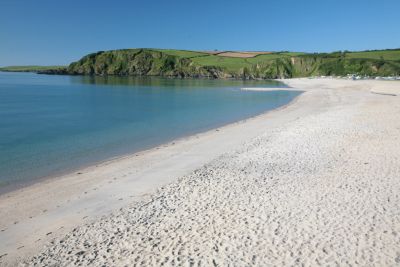 There are many opportunities for sea angling in the area, and the spectacular coastline is worth exploring. Along the coast are numerous nearby coves and sandy beaches. Places such as the small, picturesque anchorage of Gorran Haven are well provided with the fauna and flora of the area. A short way to the north is the sandy beach of Pentewan whilst in the opposite direction is the quieter cove of Portmellon. Further on are Vault Beach and the imposing, 400 feet high headland of Dodman Point. Many of the local beaches have interesting rock formations and are popular with fossil hunters.