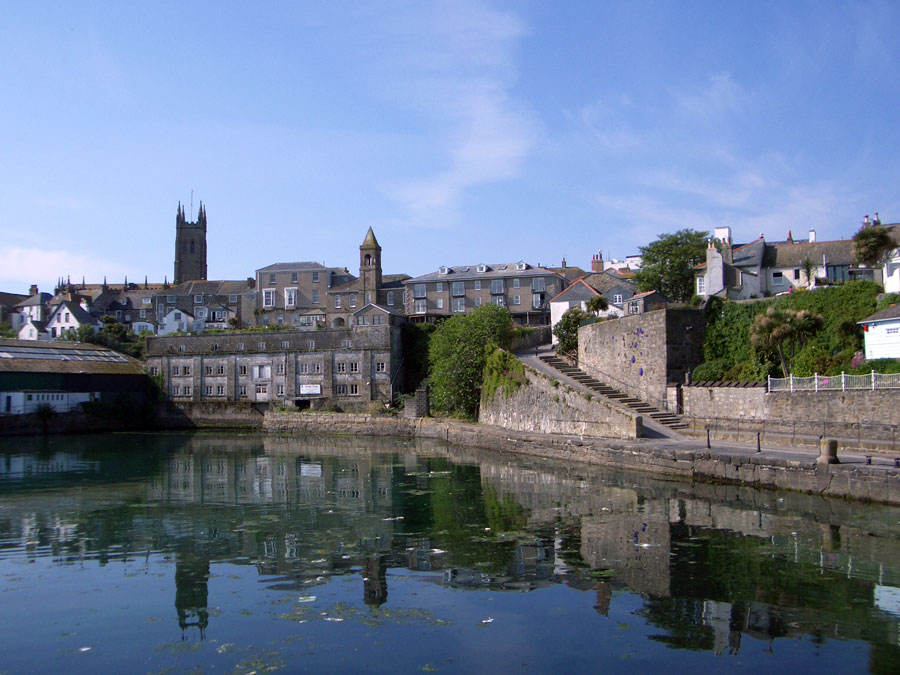 The name Penzance is derived from the Cornish Pen Sans, meaning holy headland, as a chapel once stood on the point to the west of the harbour more than a millennium ago. The town received various Royal Charters from 1512 onwards and has long been the commercial centre for the Land’s End Peninsula.

The town’s most famous son is probably Sir Humphry Davy (1778-1829), whose statue stands in the centre of town at the top of Market Jew Street, in front of the granite porticoes of the 19th century Market House. Across the road is a plaque to the memory of the great man, appropriately on the wall of the chemist’s shop where he served an apprenticeship.

Chapel Street is the most historic of the Penzance thoroughfares, although most of it dates from the end of the 18th century. Near to the top is the Egyptian House, built in 1836 during a national craze for Egyptology. Opposite is the Union Hotel, where the death of Nelson was first announced in 1805. At the rear of this building is the Georgian Theatre, built around 1786. Edmund Kean was among many famous actors to appear here. It is possibly the oldest remaining Georgian theatre in the country although at present its future hangs in the balance.

Further down Chapel Street is the Turk’s Head, believed to be the oldest pub in the town. The Admiral Benbow, complete with its rooftop pirate was partially constructed in the 17th century, as was Abbey House just around the corner. One the right hand side of the street, further down, a plaque marks the home of Maria Branwell, mother of the Bronte sisters.

Every June Penzance plays host to the Golowan and Mazey Day celebrations. Revived in 1990, Golowan (meaning the Feast of St John) has grown into a major event spread out over a week and attracting tens of thousands of visitors. The festival goes back to the pagan celebration of Midsummer and the St John's Eve parade certainly reflects that aspect. The following day is Mazey Day, when traffic is banished from the centre of Penzance and stalls line the pavements. The highlight of the day is the series of colourful processions.

What to see in Penzance

Down at the bottom, close to the harbour is the Dolphin Inn, which is said to have been the first place in Britain where tobacco was smoked. It is also said to have housed Sir John Hawkins during the wars with Spain and to have been the venue for trials over which Hanging Judge Jeffreys presided in the 17th century.

From Penzance harbour, ferries go to the Isles of Scilly. It is also possible to travel to the islands by helicopter from the newly reinstated Penzance Heliport and by small plane from Land’s End Airport. A little way along the seafront in the direction of Newlyn is the art deco Jubilee Swimming Pool, opened in 1935.

The sub-tropical Morrab Gardens are well-worth a visit. They are also home to Morrab Library, one of the few remaining private libraries in the country. Around this area are many attractive Regency buildings. Not far away is Penlee House and Gardens. The delightful small museum has regular exhibitions of paintings and houses a permanent collection of work by Newlyn artists such as Stanhope Forbes and Walter Langley. During the summer, plays are performed in the park and the local tennis club also has its home there. There are many small galleries in the town.

The area surrounding Penzance is packed with antiquities and ancient sites. One of these is the Iron Age village of Chysauster which was inhabited from around 100 BC until the 3rd century AD. Another interesting site is the old closed Jewish Cemetery, a relic of what was once a considerable Jewish community in the town.