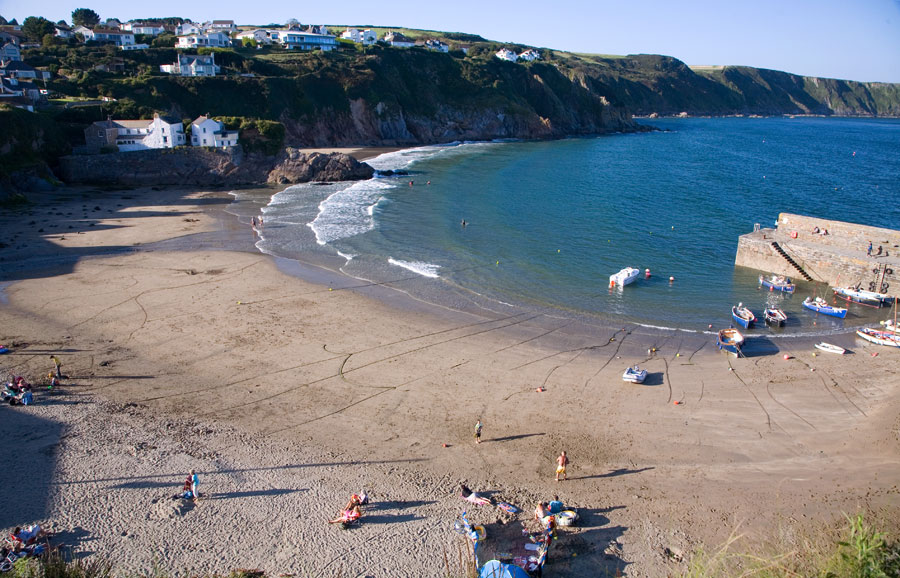 The Roseland Peninsula is an attractive area of quiet beaches, impressive coastal and river scenery and picturesque villages, within easy access of Truro, Falmouth and St Austell. What is often thought of as the capital, St Mawes, can be visited by passenger ferry from Falmouth.

One of the most attractive routes is to take the King Harry Ferry from Trelissick. The ferry is close to the National Trust gardens at Trelissick and is just a few miles from the main Truro to Falmouth road. Although there has been a ferry crossing here for hundreds of years, the present chain ferry began in 1888. There are plans to replace the current ferry with a much larger one in 2005.

Tregony is known as the 'gateway to the Roseland'. The exceptionally wide main street of the village is a relic from the days when this was a busy port. The width of the street was due to the amount of traffic down to the river. These days the river is silted up, but the village is still attractive and the 17th century almshouses boast an unusual wooden gallery.

After the river at Tregony was blocked by silt from the china clay and tin streaming works near St Austell, small quays were built at nearby Ruan Lanihorne. Silt dredged from the river was used to make bricks in the factory here. The Ruan River is a popular place for bird watchers. There are some lovely riverside and woodland walks in the area between here and Tregony.

The Round Houses stand at each end of the village of Veryan. They were originally built by a missionary for his daughters, which may explain the shape. In a round house there are no corners in which the Devil can hide. Close to Veryan is Carne Beacon, the legendary place of burial of the 6th century chieftain, Gereint of Dumnonia. This is really a Bronze Age barrow probably built around two thousand years ago. Not far from here is Veryan Castle, a small Iron Age hill fort.

St.Just-in-Roseland has an interesting church in an idyllic setting. The church gardens stretch down the hillside to the river. It is said that Joseph of Arimithea landed here on his way to Glastonbury. Nearby St. Just Pool is a deep body of water once used by the navy for supply ships and ships in quarantine.

Portloe is still a busy fishing village, particularly for shellfish. Another fishing village is Portscatho, which used to be one of the centres of the pilchard industry. It has pleasant beaches. Gerrans was named after King Gereint of Dumnonia. The king’s castle was reputed to have been Dingerein Castle.

The best beach on the Roseland is said to be Porthbeor Beach, a sheltered stretch with some interesting rock formations. There are pleasant walks in the area, along Porth Creek. Another place worthy of a visit is the 19th century lighthouse near St Anthony Battery. It is sometimes open to the public during the summer months.