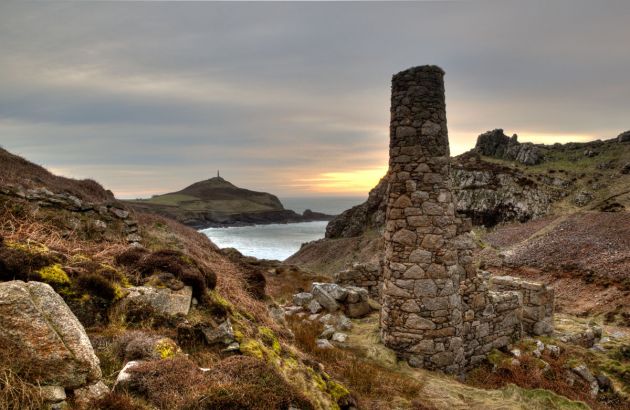 The name Cornwall is most likely derived from the tribal name 'Cornovii' which probably means the 'horn people' - the horn referring to their location at the end of the south-western peninsula.
To this the Anglo-Saxons added 'Wealas' meaning 'foreigners'. This is also the derivation of the name of the country Wales.

Cornwall was first settled by hunter-gatherers in around 10,000 BC - the mid Stone Age. It is during the Bronze age that the early Cornish created most of the ancient stones and megalithic sites that are found through out the county.

It is towards the end of the Bronze Age that settlements become well defined and farming replaces hunting as the main provider of food. The Iron Age sees a further refinement of farming with the introduction of iron tools. This is the period in which trading begins

At the beginning of the 19th Century Cornish mines were some of the largest enterprises anywhere in Europe and very much at the forefront of the industrial revolution. The copper industry had grown beyond any other sector in the British economy and it was centred in West Cornwall.

It was during this period that a great deal of what are considered Cornish traditions became ingrained and the culture defined. Similar to other working class, industrial regions spectator sports, particularly rugby, became popular, every town had it's own choir and brass band.
It was also a time of emmigration. It is estimated there are aroun 11 million Cornish descendants around the world in countries such as Australia, South Africa and the United States - The Cornish Diaspora

From Captain Bligh to King Arthur, they all have ties to Cornwall. The list of people connected to Cornwall includes everything from poets to pirates, boxers to bards and saints to scientists!

We have compiled and extensive list of short biographies of many of these interesting people associated with the Duchy from ancient times to those still living.