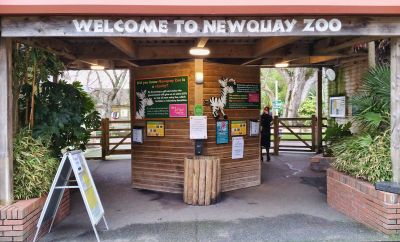 During the period between 1994 and 2003, the zoo was privately owned by Mike Thomas and Roger Martin who developed it into one of the best in the country. They established a partnership with St. Austell College and developed an educational facility on land next to the zoo, offering a BTEC in Animal Management and an HND in Zoological Conservation Management.

In August 2003 Newquay Zoo and Paignton Zoo joined forces to become part of the Whitley Wildlife Conservation Trust family, which also includes Living Coasts, Slapton Ley and two urban nature reserves. These days Newquay Zoo is at the forefront of conservation and education, specialising in the breeding of endangered species. Recently the zoo has led the way in exciting innovative enclosure design to enable free-ranging animals. One of these new enclosures houses a pair of endangered carnivores - the Madagascan fossas. These are frequently called tree cats because of their similarities to the domestic pets and their ability to climb trees.

Set in lovely sub-tropical gardens, Newquay Zoo, now known as Newquay Animal World, is home to many of the world's endangered species. These include red ruffed lemurs, the Siberian lynx, red pandas, black apes and pumas. The zoo is now renowned for its captive breeding and its ground-breaking and innovative conservation programmes. There are many informative displays which not only educate the people who visit the zoo but also encourage them to respect wildlife.

Part of the Tropical House has been made to look like ancient temple walls, thus creating a special ambience for this habitat for exotic animals. High in the canopy of the building are birds, bats and monkeys. Iguanas bask on the branches of trees, cooled by spray from the waterfalls. The pools below contain colourful tropical fish.

'Roxy Peru', the baby Hoffma's sloth has an enclosure within the Tropical House.
A rainforest exhibit enables the visitor to approach a pygmy marmoset, the world's smallest monkey, in addition to seeing a golden-headed tamarind, parrots, turtles and mouse deer. This exhibit is very hot and humid, to create a more natural environment for the animals.

A wide range of animals from around the world live within the exotic, lakeside gardens. There are meerkats, who stand on their hind legs as though on sentry duty, penguins playing in the pool
and many more strange and unusual creatures. The zoo contains everything from the very small creatures such as tiny monkeys and hedgehogs to the large cats.

Some of the highlights of each day are feeding times. There are also talks by friendly keepers who are always ready to answer any questions about the animals. There are some beautiful picnic areas, barbeques in the summer and play areas for children. These include the Tarzan Trail and the Dragon Maze. A zoo shop sells books, toys, paintings, games, cards and even'zoopoo'. This is produced with the help of Duchess, an elephant at Paignton Zoo, and is made by composting organic matter with the animal manure. Purchasers may be pleased to know that high temperatures during the processing ensure 'zoopoo' has no unpleasant smell.

The zoo is just off Edgcumbe Road in Newquay and there is ample car and coach parking. The wheelchair-friendly site is about ten minutes walk from the town centre. There is also a regular bus service and the 'Surf Rider Train' during the summer months. The zoo is open daily throughout the year, apart from at Christmas.