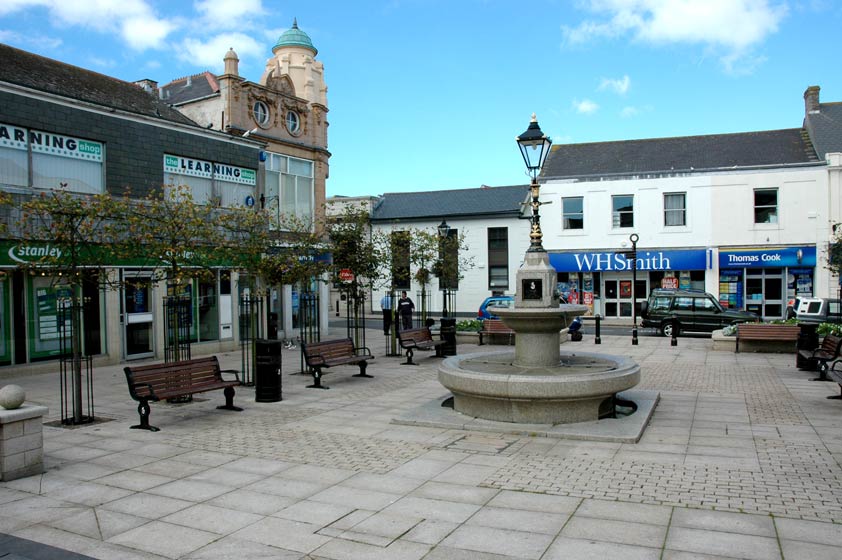 Camborne is a comparatively recent town. Much of its growth was associated with the mining boom in the early 19th century. Before this, Camborne Churchtown was a small hamlet surrounded by moorland. It was only one small place among a cluster of other villages, most of which were larger. The original road to Camborne was through Tuckingmill from where travellers had to follow a route through Treswithian to reach the hamlet.

When the great turnpike road was built through Cornwall in 1839, Camborne came into its own. Baker's Lane was extended and later this became Trelowarren Street, now Camborne's main shopping street. By 1830, the insignificant hamlet had given way to a fast growing town, important due to the tin and copper mines surrounding it. Several new streets had been added within these few years and others were planned.

Camborne reached the peak of its prosperity in the mid 1880s. In 1841 the population numbered 10,061 and by 1871 this had risen to 14,929, the highest ever figure. As the population grew, the town became overcrowded. Drunken brawls riots and lawlessness became more frequent. Methodism did what it could to keep the peace and at one time there were five chapels in Camborne. On one occasion rioting became so furious that the police could not cope and the militia was sent for. These were nicknamed the Red Jackets and the incident is remembered still in the name of the pub in Trevenson Street. Following the depression in mining after 1873, the years of mass emigration to mining fields overseas began. Even then, Camborne was saved from total ruin by the world-famous Dolcoath mine - the Queen of Mines. It was deeper and more productive than any other Cornish mine and supported hundreds of families for generations before closing in 1921.

Camborne never again enjoyed the prosperity of its boom years, but you can still see many of the fine buildings and institutions from this era. Follow the Town Trail and introduce yourself to Camborne's architecture and history. The town is close to Carn Brea Leisure Centre and not far from the resorts of the north coast of West Cornwall.

Camborne was a prosperous boom town in the nineteenth century, due to the tin mining industry. Sadly, the last tin mine closed a few years ago but the Camborne School of Mines is still a thriving educational establishment in the town. The local museum has a mining section and old beam engines can be seen at Cornish Engines.

There have been many improvements made to Camborne in recent years and the newly refurbished town square is worth a visit. The town's most famous son, Richard Trevithick, invented a steam engine which travelled along the road. His statue stands outside the town library. The inventor is celebrated by the annual Trevithick Day. Attractions include model exhibitions, vintage vehicles, performances by local Male Voice Choirs, concerts by the Camborne Town Band and other local bands and the dances. The two dances are the Bal Maidens' and Miners' Dances, which are performed by local school children led by the town band. The event is held around the end of April each year and the streets of the town are closed to traffic. In addition, Camborne holds a music festival each November.