The name of Tintagel immediately conjures images of King Arthur and the legends associated with him. The blackened ruins of Tintagel Castle brood over the coast, but no-one can say for sure whether this was really the place where Uther Pendragon seduced the Queen of Cornwall. The ruined Norman castle is much more recent than the times of the legend, although there are signs of much earlier settlements. Other legends have it that Camelford has a connection with Camelot and that King Arthur died at Slaughterbridge and his spirit returned to haunt Tintagel. 15 miles away is Dozmary Pool on Bodmin Moor. Legend says this was the last resting place of Excalibur, King Arthur’s magical sword. Whatever the truth of the old stories, the coastal scenery is certainly the stuff of legends. 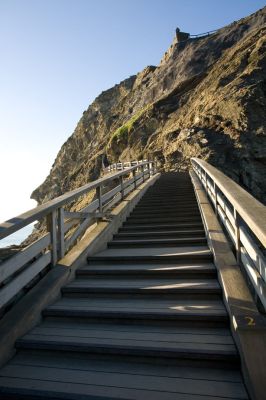 Those wishing to visit the ruins of the 12th century castle should park in Tintagel village, and then walk half a mile along uneven track to Tintagel Head. There is a steep climb up steps to reach the castle. Across the bridge on Tintagel Island, there are also the earlier ruins of a Celtic Monastery. Two tunnels run beneath Tintagel Island. The shorter tunnel, made with metal tools, opens out in the meadow above the cliffs. The larger one is known as Merlin’s Cave. Legend tells that Merlin still walks there and that his voice can sometimes be heard. The Idylls of the King, by Alfred Lord Tennyson, Merlin is described standing on the beach, beside the entrance to the cave, with the infant Arthur raised high in his arms.

Condolden Barrow dominates the hill above Tintagel Island. The massive proportions and situation of the barrow suggest that a figure of considerable importance power was buried here. Local legend claims it to be the grave of Queen Isolde. Thomas Hardy used this belief in The Famous Tragedy of the Queen of Cornwall. It is more likely that it is the burial place of Cador, the 6th century king of Cornwall. In the 12th century poem The Dream of Rhonabwy, Cador is described as one of Arthur’s knights. He is said to have led the British warriors in their rout of the West Saxon army at the Siege of Mount Badon. In his History of the Kings of Britain, Geoffrey of Monmouth described Cador as the sword-bearer at Arthur’s coronation and the man who brought up Guinevere when she was a child. 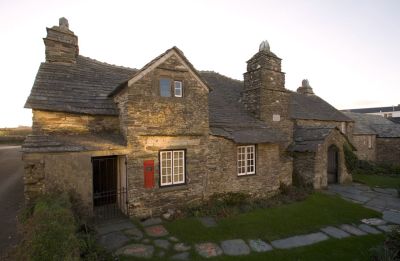 In the town itself, the Old Post Office is originally a fourteenth century manor house with a topsy-turvy slate roof, recently restored and now one of the National Trust’s most attractive small buildings. In addition, there is a Roman milestone from around 250AD in the parish church.

Unfortunately, the village has been over-commercialised and the best thing about Tintagel today is probably the glorious coastal scenery. However, there are one or two potteries and galleries in addition to the many gift shops, cafés and restaurants. The village is worth a visit and is within easy reach of many other beauty spots of this part of North Cornwall. For Arthurian enthusiasts it is unmissable.