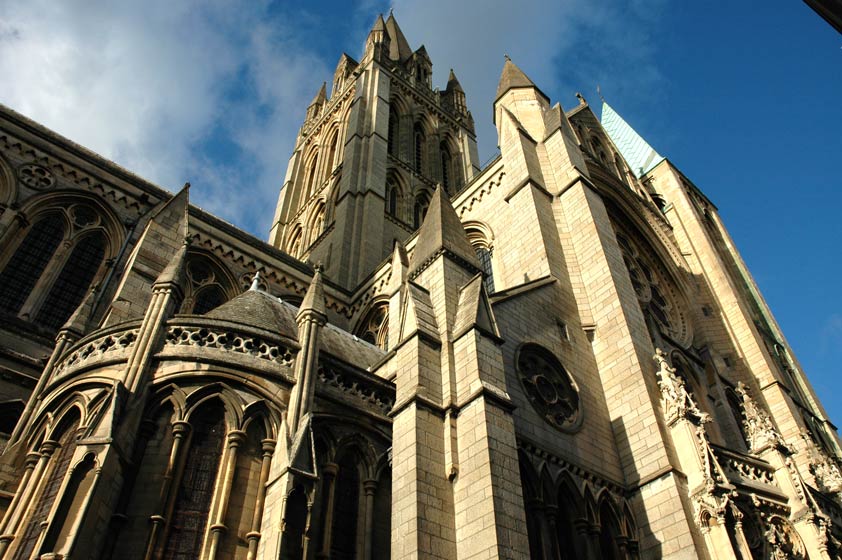 The only city in Cornwall, although Bodmin is still nominally the county town. Truro’s most striking feature is the Cathedral, with its green spire and gothic appearance. Built at the turn of the century it dominates the Truro skyline with its 250 foot high towers and has some interesting Victorian stained glass windows. The south aisle of the cathedral is what remains of St Mary’s Church, said to be one of the finest pieces of medieval architecture in Cornwall. Its decorative style contrasts with the simplicity of the new part of the cathedral.

The city's heritage is as a market town and port dating back over 800 years, booming during the tin mining era. Sat at the head of a navigable stretch of the River Fal Truro was within easy reach of the sea but more protected than Falmouth downstream.

Nowadays the port is mostly used for pleasure cruises along the tributaries of the River Fal to Falmouth and St Mawes but in the not too distant past this was a bustling working port. Tales abound of the unsavoury characters and goings on along the quayside with press gangs and and rouges a plenty. As a result of all this nefarious activity there are no shortage of ghost stories from the wharfside and supernatural goings on have long been reported at the Radio Cornwall studios on Phoenix Wharf. These days much of the wharfside has been turned into offices and apartments and the only industrial activity is on Lighterage Quay's long quayside where cargoes such as scrap metal and cement are still loaded.

In the early days of the city, there was a Norman castle overlooking the river. Nothing remains of this today apart from the name of a street and a hill. During the Civil War, Truro declared for the Royalists and, for a short time housed the Royalist mint. In those days there was constant rivalry between Truro and Falmouth, particularly over control of the river. Prosperity was short lived though and when the Parliamentarians took the town the mint was moved to Exeter and control of the river was divided with Falmouth.

In spite of its early history, few very old buildings remain today and most of the town centre dates from Truro's Georgian, Regency and Victorian heyday. Many fine examples of 18th century architecture may be found in Princes Street, notably the Mansion House and Princes House. There are also many fine Georgian houses to be seen on Lemon Street, which climbs up from the city centre to the Lander Memorial. This is a column erected in 1835 to commemorate the local Lander brothers, explorers who discovered the source of the Nile.

Today Truro retains its standing as a market town and is main shopping town of Cornwall with much of the city centre converted to pedestrian areas. There is a large indoor market on Lemon Quay and occasional farmers’ markets close by. In addition to the major stores and chains such as Marks and Spencers, there are still many small individual shops to be found down the narrow streets of Truro. In spite of its city statue, Truro is not the largest town in Cornwall; there are several larger agglomerations. It does however employ more people than other towns with the major employers being the Royal Cornwall Hospital, Truro College and Cornwall Council. As a result the city suffers from a level of traffic congestion little seen in the rest of Cornwall.

The Royal Cornwall Museum in River Street has a fine geological collection and many other interesting exhibits on Cornish history and culture. Of particular interest is the 6th century 'Arthur's inscribed stone', found at Tintagel Castle and a real Egyptian mummy! In addition to the permanent collections there are frequent other interesting temporary exhibitions.

The Hall for Cornwall is now the premier entertainment centre for the county, hosting touring groups from opera, ballet and other companies. It is within a complex of cafés and shops in a recently renovated area of town.

Positioned almost in the middle of Cornwall, Truro has been the county’s administrative centre since the main courts were moved here from Bodmin. It is also the ecclesiastical and cultural centre of the county. Within easy reach of Truro are many of the beaches, particularly on the Cornish Riviera, and the lovely Roseland Peninsula. Its position and excellent transport links make it a good base for exploring the rest of Cornwall.