Launceston is the ancient capital of Cornwall and still boasts a medieval south gate and the ruins of a castle. In the 11th century Domesday Book it is described as the property of Count Robert of Mortain. At that time it had 2 mills, 40 acres of pasture, 3 slaves, 1 villager and 13 smallholders in addition to the Count’s castle. In Malory’s Morte d’Arthur, this is described as Castle Terrible. Until the 19th century, the castle green was used for public executions.

Launceston has been a market town since the time of the Normans when the Count removed it from the nearby St Stephens. It was the site of the County Assizes before the roads were improved and Bodmin became the county town in the early eighteenth century. There are some fine buildings in the town centre, although a street of medieval houses was demolished in the middle of the 20th century. 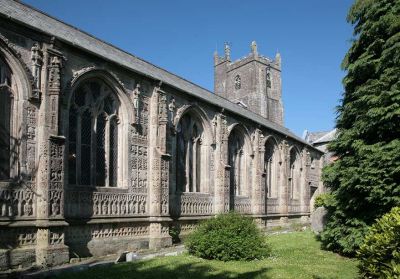 Through the town gate and up the hill is the town square, which serves as a car park these days. The church of St Mary Magdalene is worth a visit if only to see the elaborate carving of the granite, unusual among Cornish parish churches. A ghoul or Kergrim is said to haunt the churchyard. It is said that if a man with a stiff neck goes there in the first few days of May. He should visit the grave of the last female member of his family buried there, pass his hand from head to foot of the grave and wipe some dew on his neck to cure it. In the case of a woman, she should go to the grave of the last deceased male.

The remains of a 12th century priory were discovered at the end of the nineteenth century in the river valley north of Launceston. Visitors should enquire about this at the Launceston Steam Railway station. This railway runs along a re-laid part of the track of the original railway from London to Padstow. There are locomotives, railway memorabilia and a functioning workshop to be seen in addition to a ride on the steam trains. 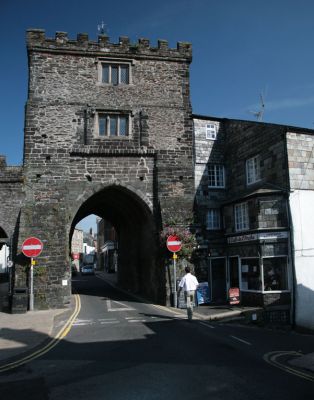 There are several other strange stories from this part of Cornwall. At nearby Yeolmbridge, the Wild Hunt may be seen by someone crossing the bridge. But woe betide any who see this twice as they will not live to tell the tale! At Botathon, the ghost of Dorothy Dingley has been seen many times, in spite of a 16th century attempt at exorcism. South of Launceston is Hingston Down, the site of buried treasure.

Treburley, another hamlet between Launceston and Callington, is worth visiting for its gallery. The Lakeside Gallery hosts a permanent collection of original paintings and other artwork commissioned by the publishers of J.R.R.Tolkien’s The Lord of the Rings.

Launceston stands almost on the Cornish border with Devon. In one direction is the expanse of Bodmin Moor, whilst in the other, just across the River Tamar, is the wildness of Dartmoor. The castle, built so long ago to guard this border, offers views of both moors.