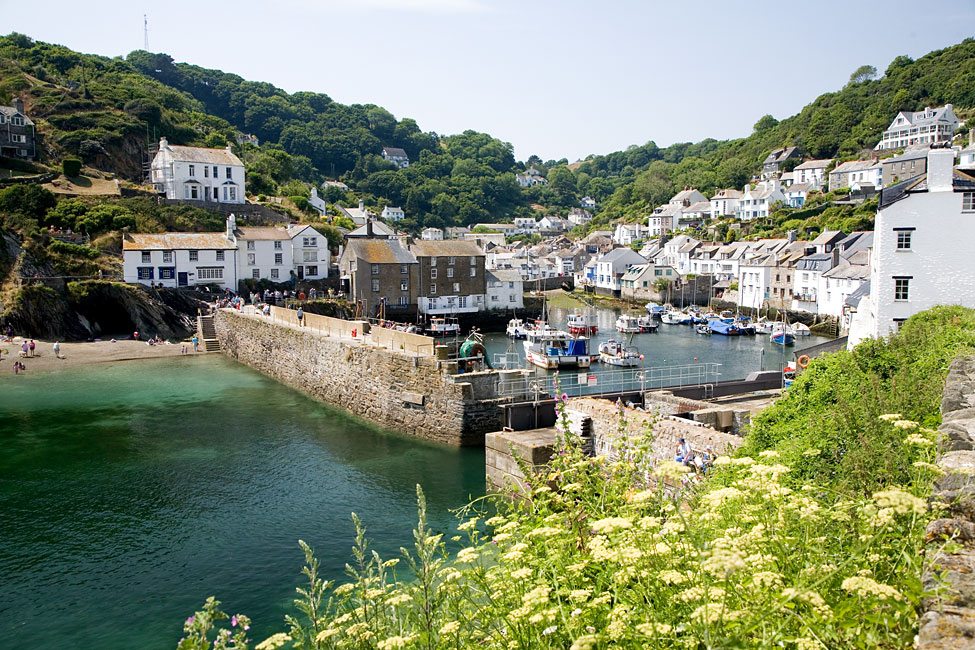 Just south of Looe is the smaller port of Polperro. A surfeit of touristy gift shops do not quite manage to spoil this quaint old Cornish fishing village whose narrow streets and pretty cottages remain undeniably attractive. Many of the cottages are covered with a profusion of flowers in summer and the streets are so narrow they are banned to cars, which makes Polperro an ideal place to explore on foot.

There are shops selling paintings, pottery, jewellery and lots more souvenirs for the visitor. There are also newsagents, bakeries and other shops selling everyday requirements. In addition, there are galleries and arts and crafts exhibitions. Polperro holds an Arts Festival in June each year. Other community events include the Water Carnival and the Furry Dance. You may see Morris men or Clog dancers in the village too. Polperro Fishermen’s Choir is famous throughout Cornwall. It gives open air performances on the quayside in the season.

At the entrance to the village, opposite the main car park, is the 14th century Crumplehorn Inn and Mill, which boasts an impressively restored water wheel consisting of 12 tons of revolving iron and timber.

The village was notorious for smuggling activities during the 18th and early 19th centuries. Everyone conspired to hide the duty-free goods from the excise men. When John Wesley visited the village in 1762, he remarked that all the locals were involved in smuggling. In The Warren, overlooking the harbour, is the Polperro Heritage Museum of Smuggling and Fishing. The museum boasts a remarkable collection of exhibits and photographs from a time when both smuggling and fishing thrived in Polperro. The museum occupies a factory formerly owned by the Teglio family from Italy. Polperro attracted many distinguished artists and photographers, from the end of the 19th century. Some of their work is exhibited in the museum.

In the 19th century, pilchards were landed in large quantities in the village. The fish were processed and packed in factories near to the harbour. Many women and children were employed in cleaning and salting the fish. Pilchards were salted and cured and the oil was extracted using large screw presses. Afterwards they were packed in barrels ready for dispatch. Polperro is still a working fishing port and at high tide boats can be seen unloading their catch on the quays which are strewn with pots and nets.

Boat building was one of the main businesses in Polperro for many years. The harbour is exceptionally pretty and well worth a visit. From the car park it is possible to ride on a horse-drawn carriage to the harbour, which is exceptionally pretty and well worth a visit. Yachts are moored in the sheltered bay and pleasure boats are on hand to offer half-hour trips along the coast towards Fowey. These trips are usually accompanied by a running commentary from the boatman, who may tell you a little more about the dangerous history behind this picture postcard facade.

Polperro has a wild and rocky shore. Along the dramatic rugged coastline is a natural pool, used for swimming. In fact there are one or two such places at high tide At low tide, in suitable weather, there is a small beach but the nearest substantial beaches are a few miles away. To the west are Lansallos and Lantic Bay, both with National Trust car parks some distance from the beaches. To the east is Talland Bay, which is accessible by car, and Looe. Further along the coast are other good sandy beaches at Millendreath, Seaton and Downderry.