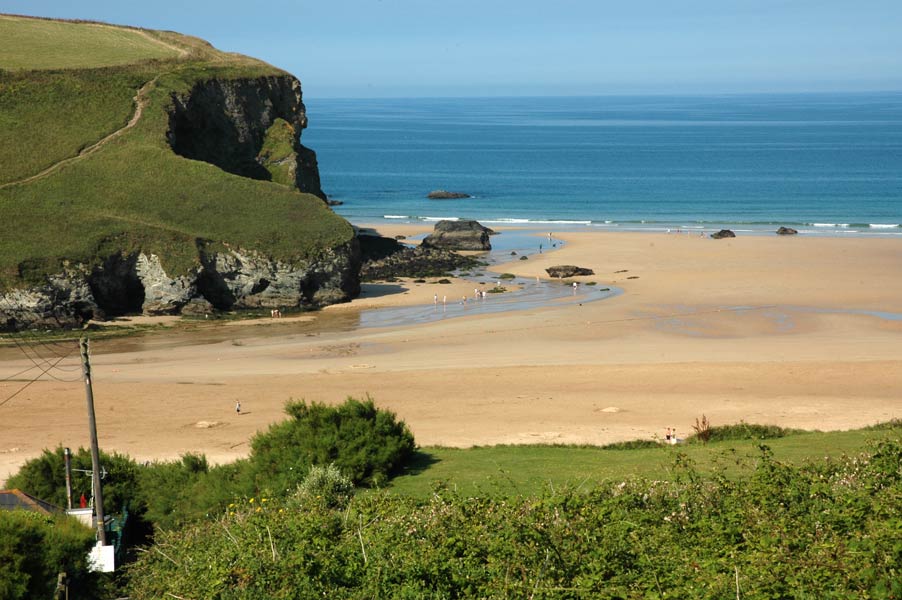 The hamlet of Mawgan Porth is situated in a lush green valley, mid-way between Newquay and Padstow on the North Cornish Coast. It is in an ideal position for exploring the North Coast of Cornwall. It has the added advantage of being very close to Newquay Airport.

Excavations carried out in Mawgan Porth in the latter part of the twentieth century unearthed evidence of a late Saxon settlement consisting of three groups of buildings and a burial ground. The settlements are thought to date from 850-1050. The small village is not over commercialised and has a small supermarket and several places for refreshments. There is a variety of accommodation in the area. Locally are pitch & putt, crazy golf and tennis courts. In addition, there is a nearby golf course and some riding stables. Beach, rock and coarse fishing are all available. Buses go from Mawgan Porth to Newquay for those looking for livelier entertainment.

The large expanse of fine sands is bounded by high cliffs to the north and south and by low ground and the River Menalhyl to the east. A stream flows to the sea at the southern edge and there are some rock pools. Toilets and refreshments are available close by and dogs are permitted on the beach which has recently received the blue flag award for clean water. The Newquay to Padstow road runs directly behind the beach and car parks are just across the road. In addition, the coastal footpath crosses the beach.

Inland the Vale of Lanherne trail leads for some two miles to the pretty village of St Mawgan where the fourteenth century Parish Church and the Convent of Lanherne are worth a visit. There is village post office and shop with an adjoining tea room serving cream teas. There is an ancient ford here, long supplanted by an old bridge over it. Further on, through Carnanton Woods, is the historic market town of St Columb Major.

There are picturesque coastal walks, minutes away and a walk along this stunning coastline soon brings you to Carnewas Island and mine, and the starkly beautiful Bedruthan Steps, supposedly created by a giant walking the coastline. The steps have in fact been created by the systematic erosion of the cliffs over the years, leaving a series of impressive volcanic rock stacks. Theses pillars rise majestically from Bedruthan Beach to form a series of columns stretching across the bay from Pendarves Island to Diggory’s Island. At low tide, it is possible to climb down the many steps to the long, sandy beach where there are several caves to explore.

A coastal walk south towards Newquay, over Beryl’s Point leads to Watergate Bay. Here is a wide range of sports and activities for everyone, including surfing, kite surfing, land yachting, wave skiing and mountain boarding. Other beaches in the area include Porthcothan, a sandy beach at low tide Treyarnon has a natural swimming pool in addition to a lovely sandy beach with rock pools and caves which may be explored at low tide. Constantine is a wide sweeping bay of golden sand popular with surfers, as is Harlyn.
View full size mawgan porth map