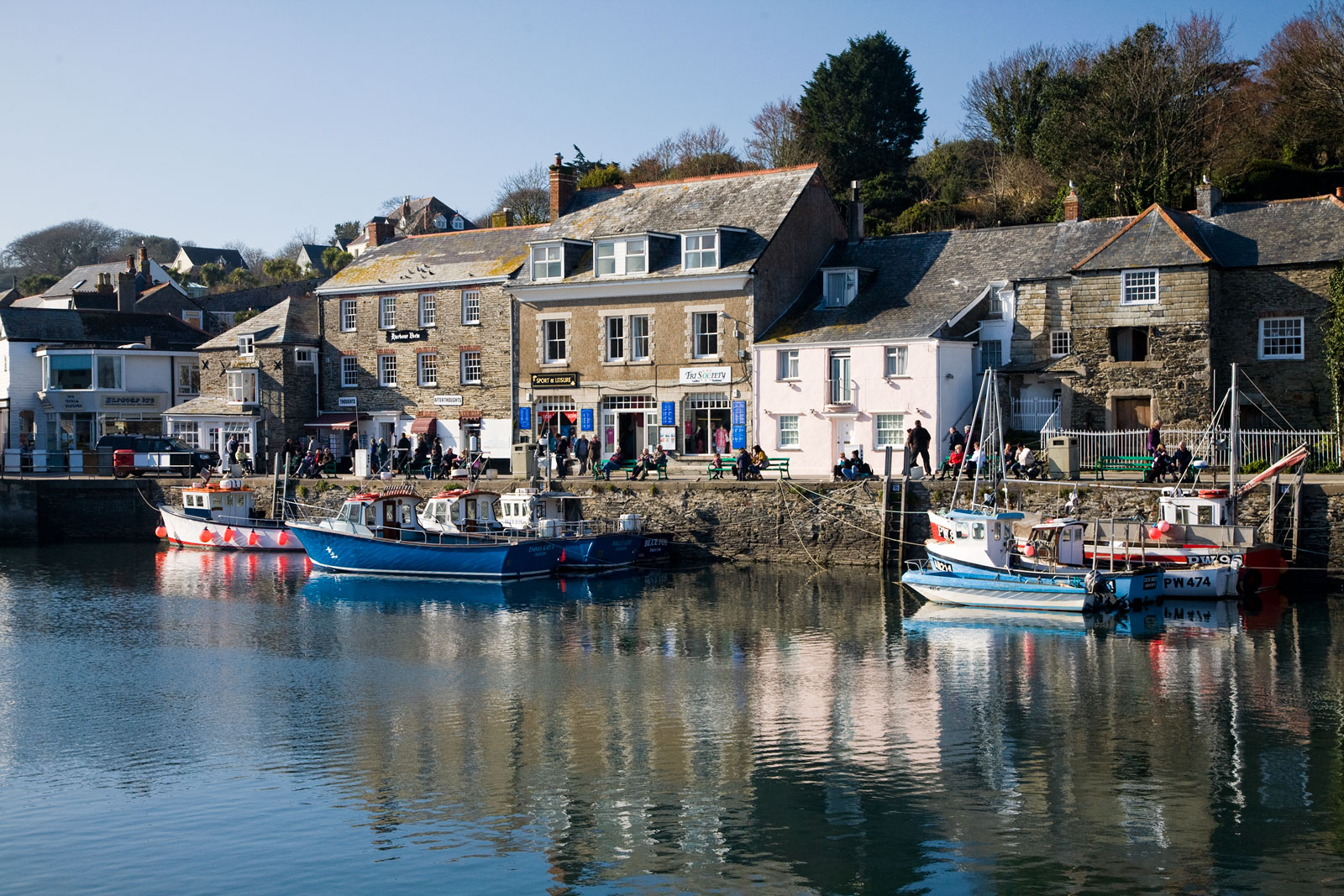 Padstow was already a bustling little port of fishermen and boat-builders in the time of Elizabeth 1st. Nowadays the local fisherman supply the many fish restaurants which have recently become a major feature of the town.

Looking at a map it is not hard to see why Padstow is where it is; The River Camel is the only sheltered estuary between Hayle in West Cornwall and Devon . Positioned in a small valley on the more sheltered westerly side of the river, Padstow became a thriving fishing port and later trading port.

It was during the 16th and 17th centuries that Padstow's growth accelerated. This partly as a result of the 1496 bridge in Wadebridge which prevented boats from passing further up the river. In 1536 harbour construction began in earnest with the first stone pier being constructed.
The growth of the mining and quarrying industry in the area established Padstow as a major port town. Copper ore was shipped to Bristol and slates exported, many from the Delabole slate quarry a few miles inland.

During the 19th century the port flourished with the pilchard industry at its height and shipbuilding becoming a major industry with 6 yards producing ships at one point.

In 1827 the Padstow lifeboat station was established and with good cause. At the mouth of the Camel Estuary is the infamous Doom Bar, a treacherous sandbank that has been the cause of over 600 shipwrecks since records began around 200 years ago. It is said that the Doom Bar is the result of a mermaids curse . The story goes that there was once a merry mermaid who watched over the vessels that went in and out of Padstow. One day, she was shot by a sailor on a visiting boat. The mermaid's curse was that the harbour would become desolate from that time on. Shortly after a great storm came, wrecking many of the ships in harbour and throwing up the sandbank.

Tourism arrived in Padstow with the railway in 1899, with the ' Atlantic Express ' running a regular service between London and Padstow. Since then the town has never looked back and although the fishing industry still survives, there is little doubt what Padstow's main industry is these days.

Today, Padstow’s harbour is also filled with pleasure boats of all descriptions. There is a regular ferry across the river to Rock (a.k.a. Little Chelsea!) , a village which has lately been all but taken over by the young and posh from London. When asked what the best thing about Rock is a true Padstow local will oft reply, "The view!".
Other vessels offer cruises around the bay.

It's hard to read anything about Padstow these days without the name of a certain celebrity chef being mentioned, so we're not going to! However, I have recently heard Padstow referred to as Padstein! Whether the town owes a debt of gratitude to the chef depends on where you're sitting, it certainly seems to have kickstarted a quality dining revival in Cornwall as a whole, but on the other hand Padstow is now one of the least affordable places in Cornwall in terms of property prices.

May Day in Padstow means the Obby 'Oss ( Hobby Hoss ) festival. This is an ancient form of the May Day celebrations welcoming the spring and probably derived from the Celtic Beltane celebration, it also incorporated various old fertility rites.
The highpoint of the festivities is when the two Obby 'Osses, the ' Old ' and ' Blue Ribbon ' take to the streets. The 'Oss, which is a kind of one man horse outfit, dances through the streets, helped on by the masked ' teasers ' during which time they try to catch maidens as the procession moves through the town.
The finale of the celebrations is at midnight when the townsfolk sing of the Obby 'Oss' death and of its resurrection the following year.

Another Padstow custom which has caused some controversy over recent years is Darkie Days . On Boxing day and New Year's Day, an old tradition is to don blackface and parade through the town singing minstrel songs. The origin of this custom is not known but it has been suggested the activities may not be acceptable and even racist. For this reason the name is likely to be changed to Mumming Day .

Part of the Camel Trail is now a cycle track converted from a disused railway track, running for five miles beside the river from Padstow to Wadebridge . This passes Pinkson Creek , an area frequented by curlews, egrets and many other species of birds.

There are many attractive beaches and coves close to Padstow. One of these is Bedruthan Steps , said to be the stepping stones of an ancient giant. Constantine Bay is one of the best surfing beaches in the area, although bathing can be hazardous at times. The sand dunes and rock pools are attractive to young families.