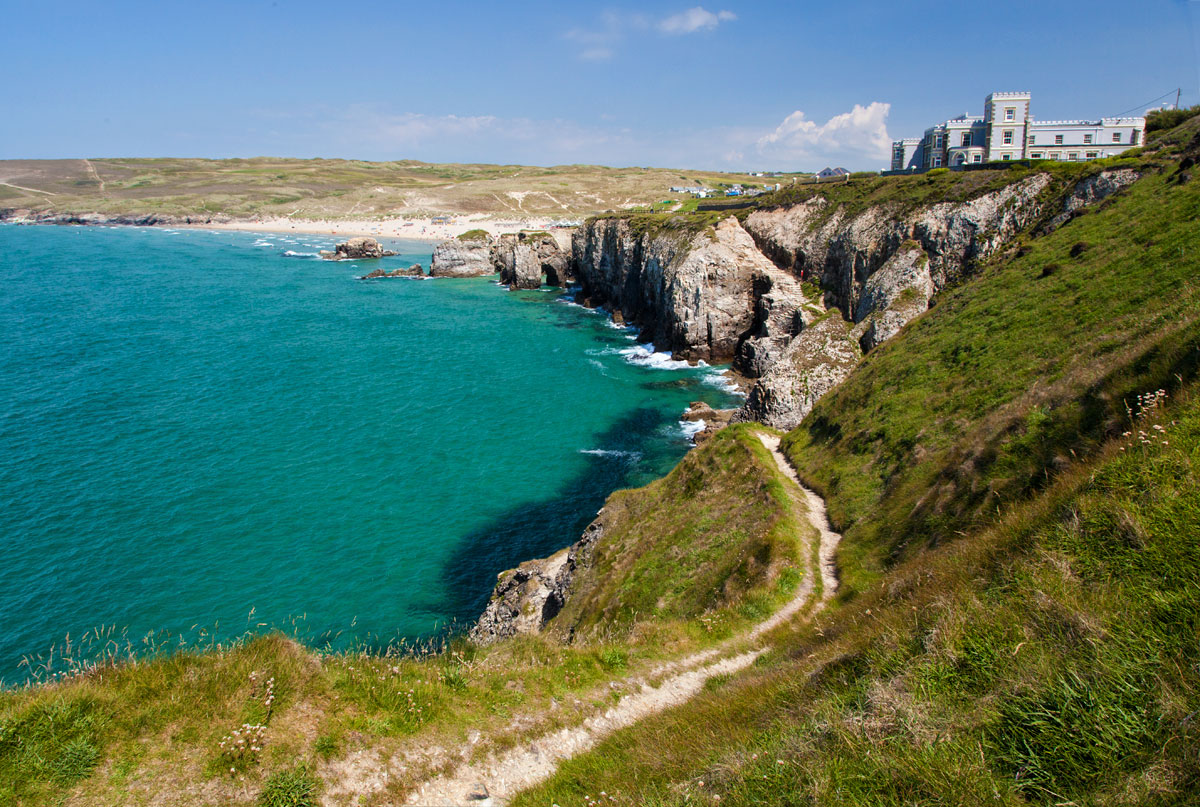 In the 19th century Perranporth was a tin mining village. It is now a family resort with miles of golden sands, attracting surfers, sunbathers and sand yachters. It also has a golf course and boating lake and there are fine cliff walks in the area. For those who are a little more adventurous, there are caves to explore and interesting rock formations to investigate. The town is also known for holding the Lowender Peran Folk Festival each October.

From the coastal footpath there are lovely and rare birds to be spotted. In the spring every hedgerow and cliff top is a colourful mass of wild flowers. Penwartha Coombe has a stream running alongside the road and is a very cool and refreshing place in which to escape the busy streets of Perranporth. There are many quaint villages in the area. Places such as Bolingey, a hamlet situated a mile from Perranporth. It is a charming place with a picturesque 17th century inn. The Bolingey September Fayre is one of the main events. The area boasts miles of footpaths and bridleways.

Just inland, among the extensive dunes, two ancient religious buildings have been lost under the encroaching sands. The oratory of St Piran was an important early Celtic monastery and one of the foremost places of pilgrimage in mediaeval Cornwall. The shrine was said to contain the relics of St Piran and the teeth of both St Brendan and St Martin. It was buried under the sand before 1500 but was later excavated. Legend has it that three decapitated skeletons were found in the Church! However, it had to be reburied in 1981 to protect the structure and the site is marked by a memorial stone. Nearby are the ruined walls of the parish church, originally built around 1150. This building was abandoned to the sand in 1804. Beside it is a fine cross which may date from the 10th century or earlier.

North-east of the village is the Piran Round, an Iron Age hill camp. It is believed the amphitheatre was once used for games and mystery plays. At the opposite end is a more recent addition, the giant cliff top Millennium Sundial. But beware if you are thinking of setting your watch by it! It tells Cornish time which is 20 minutes ahead of GMT.

Perranporth Airfield was a Spitfire Station during the Second World War. Pilots from many different countries flew from here and there is a roll of honour, in the control tower, commemorating those who lost their lives. English Heritage considers this to be one of the most important remaining airfields from the Second World War and there are still many interesting features to be seen. Today the airfield is devoted to gliding and leisure activities and scenic flights operate from here.

This is Poldark Country and Winston Graham wrote his first Poldark novel whilst living in Perranporth. There are lots of old engine houses from the former tin mines protruding from the landscape. In addition, there is Wheal Towan, the remains of an eighteenth century copper mine. The Perranzabuloe Folk Museum in Oddfellows Hall may be worth a visit.

Other neighbouring resorts are St Agnes, Porthtowan and Holywell Bay, formerly the home of W.J.Burley, the creator of Cornish detective, Wycliffe.