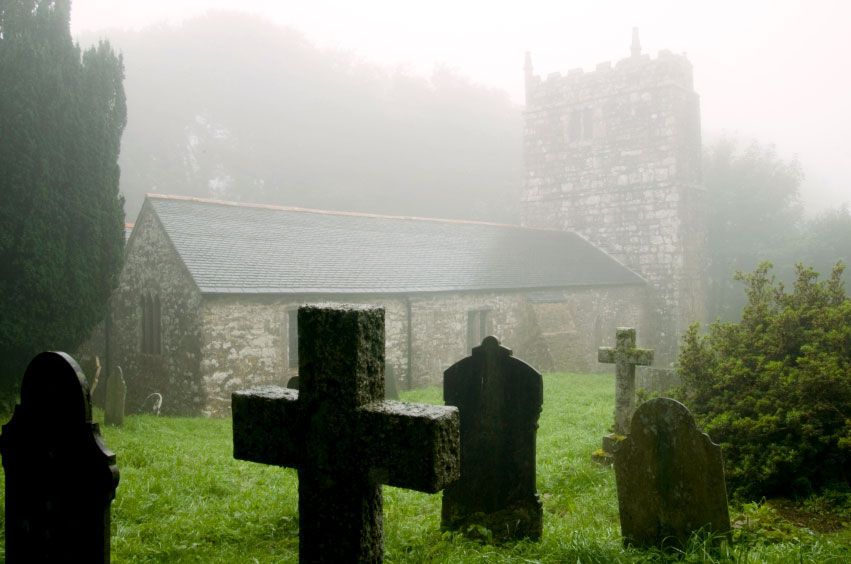 The hamlet of Warleggan on the edge of Bodmin Moor consists of about eleven houses a church and a chapel. It was previously known as the most remote village in Cornwall until a road was built in 1953 linking it to the A38. Warleggan is now isolated between the A30 and the A38, almost directly east of Bodmin. The best approach is to turn off from the road between Cardinham and St Neot.

The church of St Bartholomew appears to have a strange relationship with some of its clergy over the centuries, and is famous for its ghost-stories. In the 14th century Ralph Tremur, the son of the second rector, was generally regarded as a heretic and a witch, while the curate of 1774 and vicar of Luxulyan , Francis Cole, is said to still haunt the road outside Trengoffe, where the wheels of his carriage are reputedly audible at night.

The last vicar to live here, the Reverend Frederick Densham, whose eccentric ways led to a boycott by parishioners, eventually preached to an empty church…
... for over twenty years! It is even said that he preached to cardboard cutouts! He lived the life of a hermit until in 1953 he was found dead in his barricaded rectory aged 83.

Present day inhabitants of Warleggan claim that Rectory, now subdivided into flats is badly haunted – and there are reports that several different ghosts have been seen. Daphne du Maurier based a novel on Densham’s story.

The name Warleggan is instantly familiar to many, mainly because of the TV series based on Winston Graham’s Poldark books. It features as the surname of one of the featured families and is the title of the fourth book. The name seems to be from the Cornish Worlegan meaning a high place.