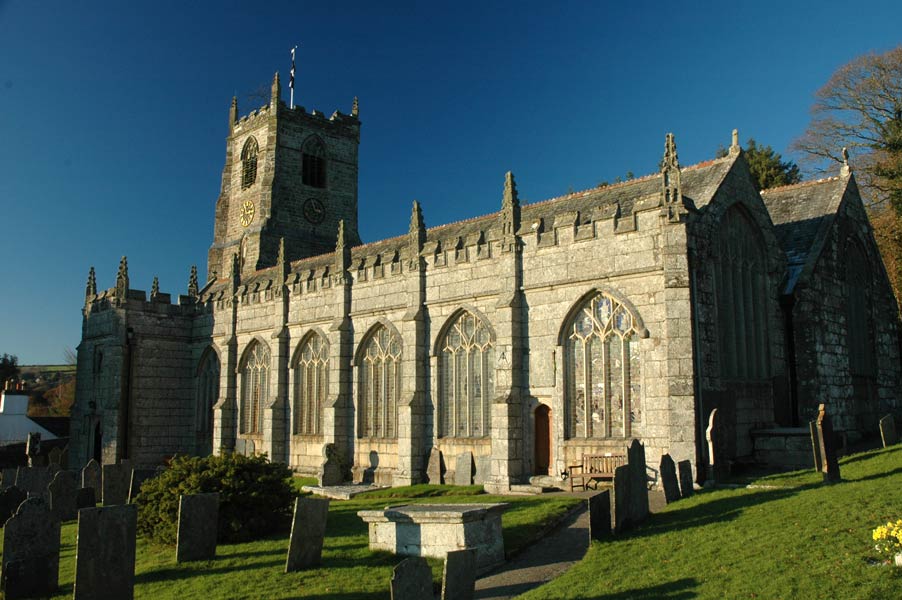 Located in a hilly area at the edge of Bodmin Moor, near the large Colliford Lake and mysterious Dozmary Pool ( said to contain King Arthur's sword Excalibur) St Neot is quite a large village with a pub, the London Inn, offering food, drink and accommodation.

Next door the ornate granite church of St Anietus has a splendid series of 17 stained glass windows which are at least 500 years old and incredibly well-preserved with over half of the original glass. In general they tell stories of the Bible and portray saints. One, however, depicts the reclusive St Neot himself in a series of different scenes. He was reputedly less that 2 feet tall and in one is depicted ploughing with two stags. This serves to show his reputation as a bit of a Dr Doolittle among saints. Other tales of his special way with animals include him stopping baying hounds with a mere look in order to save an exhausted deer and a moralistic tale of not taking more than one needs from nature. Legend has it that he was promised a permanent supply of fish from his well if he swore to only take one a day. When taken ill, a well-meaning monk brought him two and was ordered to put them back whereupon they miraculously came back to life.

Outside in the churchyard, a fine cross from the 9th century is renowned for its ornamental carving and suspended from the tower is an oak branch in remembrance of the defeat of Cromwell by the Royalists and Charles II’s escape by hiding in an oak tree. A small walk away is the Holy Well, housed in a cute little building.

Carnglaze Caverns nearby make for an interesting visit. Situated in the local slate quarry and dug by miners, they were once used to stash contraband goods and now contain a mystical clear blue underground lake.

Cardinham Woods are also not far and are perfect for woodland walks or cycle rides. The village of Cardinham itself has more fine examples of carved granite crosses in its churchyard. In the other direction towards St Cleer, the National Nature Reserve of the Golitha Falls constitutes another lovely woodland day out where the young River Fowey rushes over rocks in leafy glades.