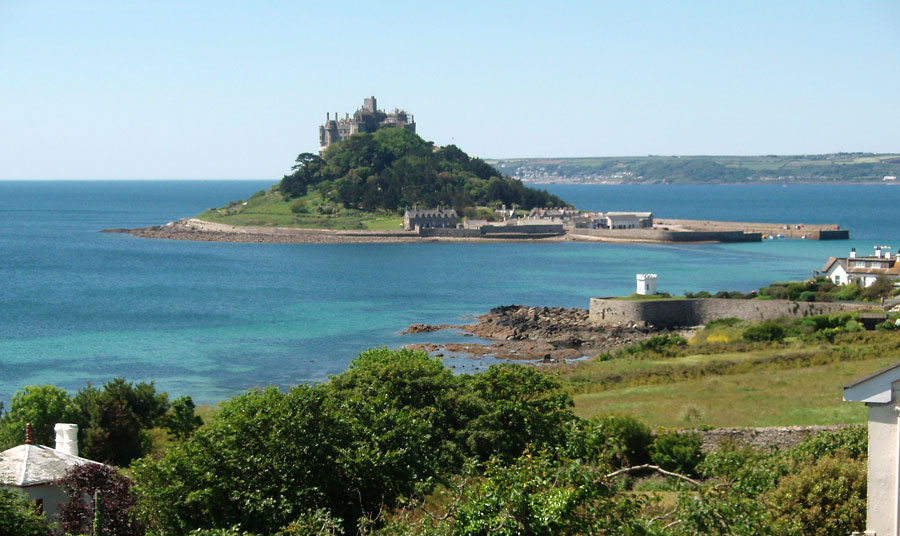 The attractive old town of Marazion is a popular destination for beach holidays and water sports, including windsurfing, kite-surfing and sailing. The name Marazion has erroneously been referred to as Market Jew but is believed to be derived from the old Cornish Marghaisewe, meaning Thursday market. The quaint town claims to be one of the oldest in Britain. It was known as Ictis by the Romans.

Mount's Bay is one of the most beautiful bays in the world. The clean, sandy beaches offer safe bathing, and there are wonderful views towards the Lizard Peninsula, in one direction, and Land's End in the other. There are many lovely walks in the area, both coastal and inland.

On Marazion Green, the ghost of a lady in white is seen to jump onto a horse behind a horseman and gallop as far as Red River, This was where Sir John Arundell, Sheriff of Cornwall, was killed whilst leading an attack on St Michael's Mount in 1471, after the Mount had been seized by the Earl of Oxford. Apparently Sir John's death was no surprise as he had been cursed by a shepherd who claimed to have been wrongfully imprisoned.

On the Penzance side of Marazion is Marazion Marsh, a large reed bed designated a Site of Special Scientific Interest. The area is host to a wide variety of animal, bird and plant life, many indigenous to the area but some, such as the mink, more recent additions. There are guided walks of the marsh available from the nearby car park. The RSPB Reserve here is popular with birdwatchers. Twice each year thousands of starlings roost there and their arrival, as the sun goes down, is quite spectacular.

The town is perhaps most famous because of the island and castle of St Michael's Mount. A causeway, once walked by pilgrims, leads to the island at low tide. At other times, visitors are ferried from Marazion in small boats. The tower and battlements of the castle rise majestically to a height of almost 230 feet above sea level. The island Mount has a harbour, shops and a restaurant. The castle and gardens are open to the public. The St Aubyn family still live in the castle.

A short distance along the coast is the attractive village of Perranuthnoe, which boasts the oldest inn in Cornwall. The sandy, sheltered beach is popular with families. It is also a good spot for surfing.

A little way further along the coast is Prussia Cove, the lair of the notorious wreckers and pirates, the Carter brothers. Nearby Cudden Point is said to be a site of hidden treasure and is frequented by mermaids. Further again, towards Helston and past the sandy beach of Praa Sands, is Pengersick Castle, said to be haunted by at least 2 ghosts. One was a crusader who murdered his second wife and attempted to kill his son by her. He later married a witch who was cruel to his son by his first marriage. Of course good triumphed over evil and the baron was killed when his horse was startled by a white hare – the spirit of the wife he had killed.

The later ghost was that of a 16th century gentleman called Millington. He tried to poison his wife but she changed the cups around and they were both carried off by the devil. The spot is also said to have been the lair of dangerous wreckers.