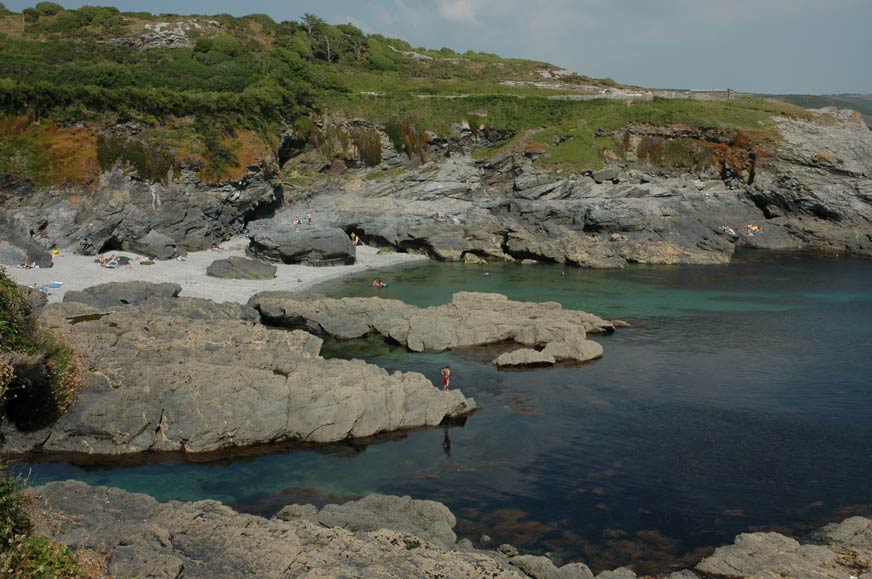 Prussia Cove consists of a smattering of houses above a small, sheltered inlet located a few miles west of Praa Sands. Signposted from the main Penzance to Helston road, the cove can be accessed via a footpath that leads from a car park at the end of a narrow lane.

The name harks back to the days of wrecking and smuggling when Prussia Cove was one of the foremost locations for landing and storing contraband. The head of operations was the notorious John Carter (born in 1738) who was given the nickname 'King of Prussia' after a childhood game he played with his brothers, Harry and Charles, in which he pretended to be Frederick the Great, the real King of Prussia. Numerous clashes took place between the Carter brothers, who stationed a battery of guns on the cliffs above the cove, and the Customs men, many of which are documented in a colourful autobiography written by Henry Carter after he reformed and became a preacher. Small-scale fishing still takes place in Prussia Cove, where picturesque tumbledown granite fishing huts are built into the side of the cliff next to the coast path. Most of the houses above the cove can be hired for functions or holidays including the romantic-looking Porth-en-Alls House, which was built to a Neo-Elizabethan design in the early twentieth century. Porth-en-Alls is a popular wedding venue and also hosts the twice-yearly International Musicians Seminar, one of the premier short-course classical music seminars in the world. Top musicians from across the globe are invited to attend residential courses with leading soloists and teachers, which culminate in a series of concerts in churches and halls across West Cornwall. The IMS was instigated by Sandor Vegh in 1971. World-famous cellist, Steven Isserlis, is the current artistic director.

Just around the corner from Porth-en-Alls is the long, sandy Keneggy Beach, only accessible by means of rope ladders bolted into the crumbling cliff face.