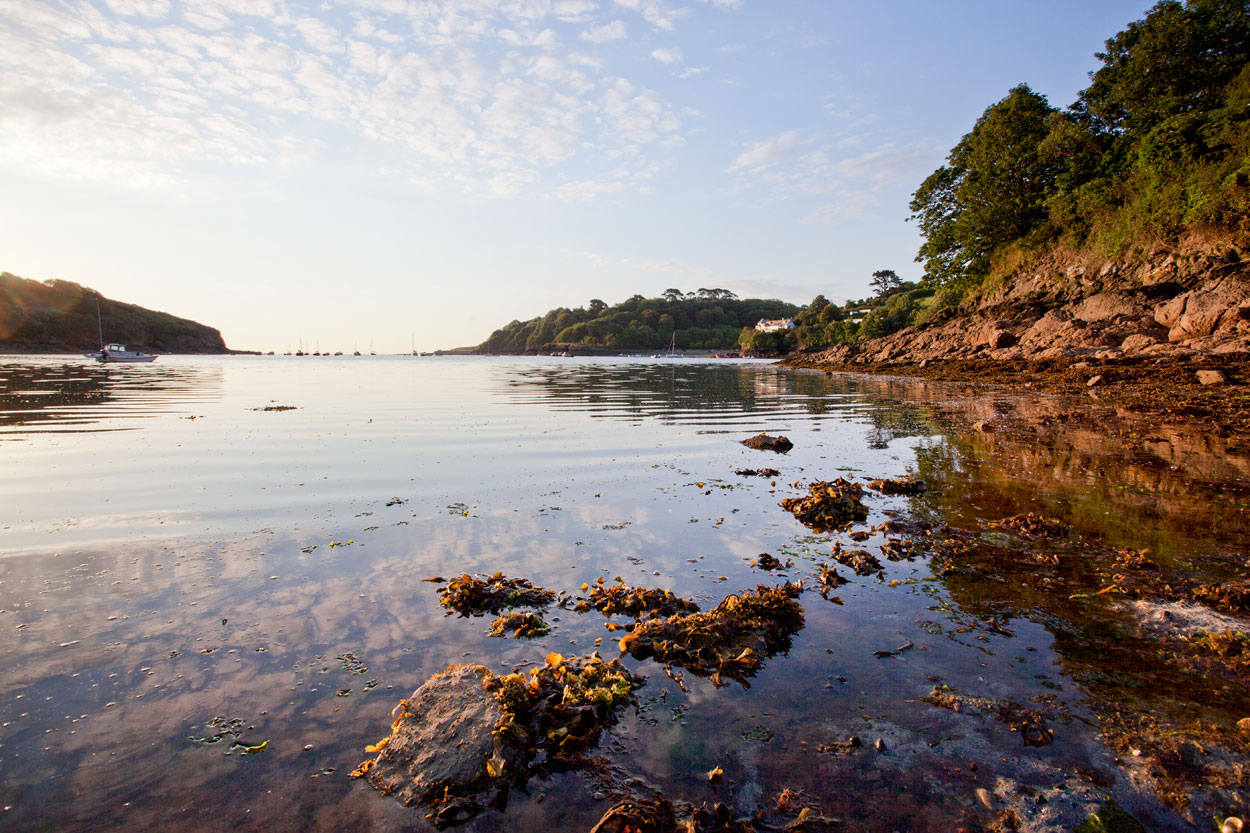 Long ago, Helford Village was quite an important port. This is difficult to believe today as one approaches the sleepy little place on the banks of the Helford River. Trading ships once brought French rum, tobacco and lace from the continent and the duty was collected at the old custom house. During the Napoleonic Wars, pirates and free traders populated the reaches of the river. Daphne du Maurier’s novel, Frenchman’s Creek, tells the story of one of these. This was her only romantic novel. Viewed early in the morning with the sea mist over the still water you can understand why, although it may have something to do with the fact that this was where she spent her honeymoon. This famous creek can be found by walking along a wooded track from the top of the village.

The Helford is probably one of the most unspoilt rivers in Cornwall, with its deep sheltered valleys, ancient oak forests and hidden creeks. There are still many small quays on the river-creek and a pedestrian ferry links the north and south banks of the river, crossing over to Helford Passage. Those who take the ferry can explore the gardens at Trebah and Glendurgan, which are full of sub-tropical plants, tree ferns, rhododendrons and azaleas, protected from frost by both the mild climate and the warming effect of the sea.. There are some pleasant beaches on the north side of the river, at Grebe and near to Bosahan.

There are beautiful villages such as Durgan, owned largely by the National Trust and difficult to reach by car, or the better known Helford Passage, with its famous Ferryboat Inn.

The lovely old church of St Anthony-in-Meneage is situated on the bank of Gillan Creek, near the mouth of the River Helford. It was said to have been built by shipwrecked Normans, driven to land here by a terrible storm. It is first mentioned in a document from around 1170, as a possession of the Priory of Tywardreath, near St Austell. The little church is well worth a visit.

After Loe Bar was formed at the mouth of the River Cober, Gweek at the end of the Helford became the main port of the Helston area, shipping much of the tin mined locally. The area prospered and many fine houses were built around the Helford River during this period. When the Cornish mining industry collapsed, due to cheaper deposits being available from elsewhere, the Cornish emigrated in their masses to mining areas of Australia and elsewhere and many sailed from the Helford.

Today Gweek is better known for its Seal Sanctuary, where injured seals are nursed back to health before being returned to their natural environment. The sanctuary also has resident Grey Seals, Common Seals, Californian and Patagonian Sea Lions, Goats, Ponies and Otters.

Today the Helford is a haven for the rich and many of the grand houses are owned by celebrities. One of the grandest houses in the area is Trelowarren, recorded in the Domesday Book. The earliest owner of this house is believed to have been Earl Harold, who died at the Battle of Hastings. It was certainly owned by Robert Mortain, half-brother of William the Conqueror, in 1086. Since 1426, the manor house has been occupied by the Vyvyan family.

Many of the roads in the area are no better than single track lanes, forcing drivers to drive slowly. Frequently, the trees form a shady arch right over the road, enhancing the charm of the area.