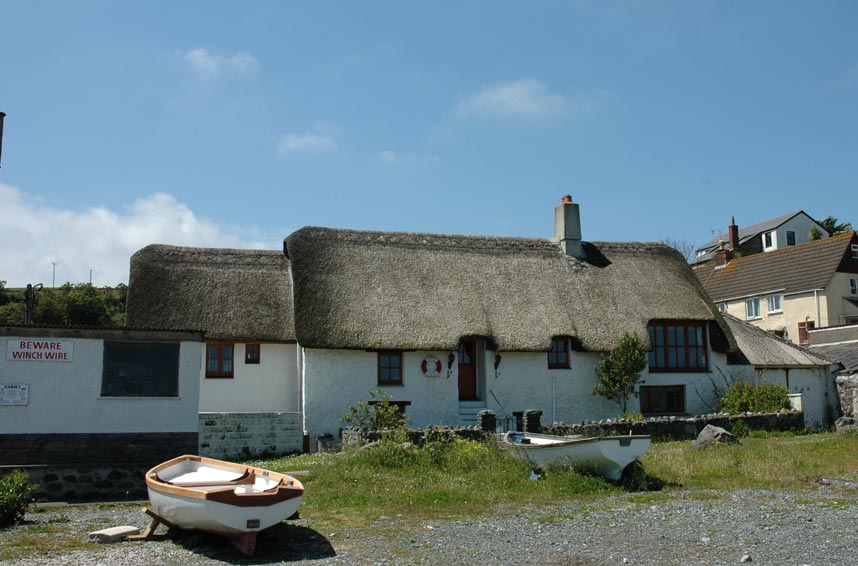 Between St Keverne on the Lizard and the Helford River, Porthallow is a small village whose pub’s name, The Five Pilchards, indicates the traditional occupation of its inhabitants. The old pilchard cellars can still be seen near the beach. Beyond here is where the rugged scenery of the serpentine rich Lizard peninsula gives way to the more sheltered and gentle landscape of the south coast river and creek networks like that of the Fal and the Helford. Nare Head, between Porthallow and Gillan, is where the two meet.

Beyond the shingly beaches here is of particular interest, that is to say the sea, as the Manacles Reef lies just a mile off shore. Many a boat has met an untimely end on this extensive rocky trap lying just below the surface of the water. Hundreds of its victims lie buried in the graveyard on St Keverne’s church, which itself has an unusual spire believed to be a specific daymark to help sailors navigate these treacherous waters. Divers delight in investigating the wrecks still scattered around the reef, most easily accessed from neighbouring Porthoustock beach.

Also near here is the old farm of Tregellast Barton where Roskilly’s organic ice-cream is made from the milk and cream of their Jersey cows. Call in for one of their 24 flavours of ice-cream, or stay longer and check out the farm. An ideal place for families, you can go for pleasant walks, watch the milking, see the animals and enjoy tea and cakes by the farmhouse fireside.

The 'giants quoits' are large rocks which stood piled on the cliffs near the Manacles for thousands of years until local quarrying encroached on the spot in the mid 20th century and they were moved to their present roadside location on the way to St Keverne.