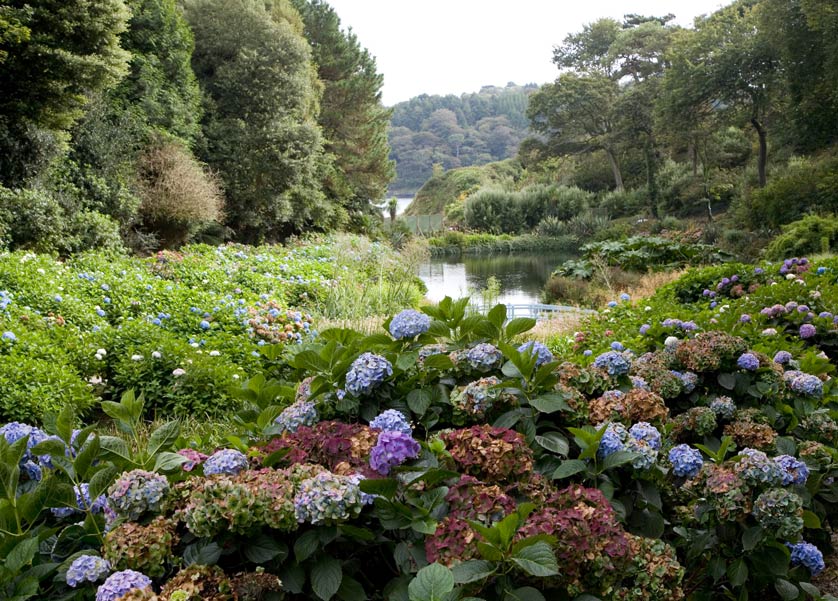 Located 3 miles out of Falmouth, Mawnan Smith is a pretty little crossroads village with thatched cottages and inn. The village itself has an attractive 15th century church which overlooks the mouth of the Helford River. In times of war the church tower provided a useful lookout post, its position also made it a useful daymark for sailors. It is thought the Smith part of the name is derived from the fact that being on a relatively busy crossroads the town had four blacksmiths at one time tending to the passing pack horses. There was in fact a smithy (Dryden James) working in the village up until 1994

Mawnan Smith is perhaps best known for being located close to two of Cornwall's great gardens - Trebah and Glendurgan.

Just to the west of the village is the National Trust owned Glendurgan Gardens. Created by the Fox family the 1820s, the sub-tropical gardens are in a wooded valley which runs down to the Helford river at Durgan. The gardens contain many fine trees and exotic plants along with the laurel Heade Maze which was constructed in the 1930s.

Not more than a couple of miles to the south is the equally spectacular Trebah Gardens. The 26 acre ravine garden is packed with sub-tropical plants and is sometimes referred to as the 'Garden of Dreams'. Again, the work of the Fox family, this time Charles Fox. The land originally belonged to the Bishop of Exeter but was purchased by the Fox family in 1831. Fox's creation took over 100 years to reach maturity by which time the Second World War had begun and the garden fell into ruin. It was not until the 1980s, when Tony and Eira Hibbert bought Trebah that the restoration began. After almost 20 years work the garden was returned to its former glory and is now rated amongst one of the finest in the World.