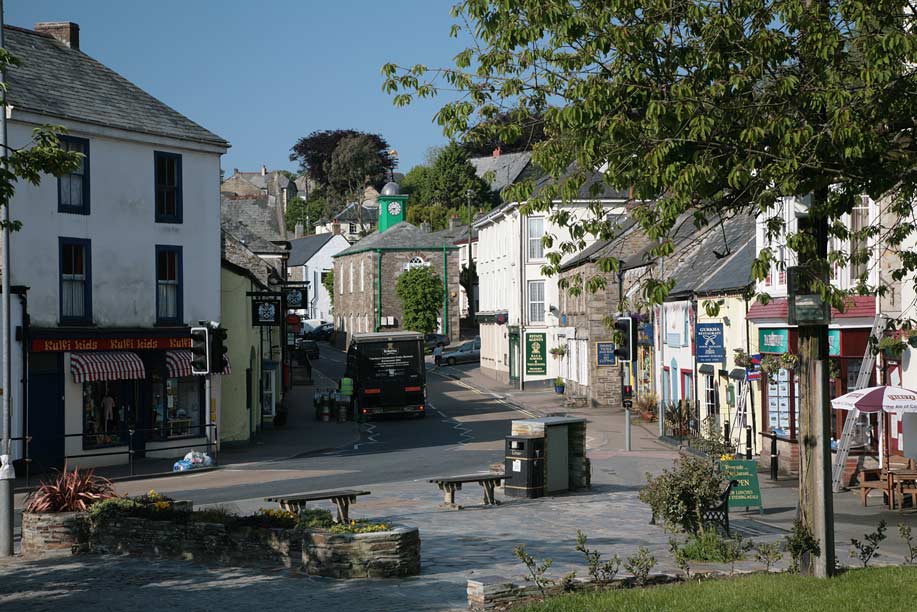 Camelford is an attractive, ancient town straddling the A39, which runs between Bude and Wadebridge. As implied by the name, the town is situated on the River Camel. This name was believed to have been a contraction of Camalanford, from cam, meaning crooked, alan, meaning beautiful, and ford. The symbol of the camel, as seen on the Town Hall weather vane, has often been used in connection with the town, but the name has nothing whatsoever to do with camels.

The town lies on the edge of Bodmin Moor and is about six miles inland from the rugged North Cornwall coast, with the delightful villages of Boscastle and Tintagel within easy reach.

Legend has it that King Arthur and his Knights are a part of North Cornwall history, and that Camelford was the Camelot, of legend. The truth will never be known, although there was a warrior king who died in a bloody battle at Slaughter Bridge, just outside Camelford. This real king's name was never known, so could it have been Arthur?

Historical record tells us that the ancient town of Camelford was on an old medieval trading route. It became an important commercial centre when a royal charter was granted in 1259 by Richard, Earl of Cornwall. This marked the creation of the present Borough. In 1552 Edward VI gave Camelford the right to send two members to Parliament. This right continued until 1832, when the Reform Bill abolished the rotten boroughs, including Camelford. As a result of its convenient position, the town's hosteleries and businesses thrived. In addition, the patronage of its MPs brought money into the town, as can be seen by looking at some of the local architecture.

The long building across the road from the car park was once the town jail. During the Napoleonic Wars many French prisoners of war were believed to have been locked up here. During the First World War it became a cheese factory.

Bridge House was built in the mid-17th century, when Camelford had become quite a prosperous place There has been a bridge here since before 1521, when there are records of it being repaired. Recently, the river bed underneath the bridge has been deepened, to accommodate floodwater after heavy rain.

Just across the bridge on the left, the Mason's Arms was obviously once a coaching inn, with its two large archways. The right hand side of the building dates from about 1600. It was gradually extended down the street and was described in 1755 as an ancient commodious and well-accustomed inn. It was on the main coaching route between London and Falmouth.

One of the most prominent buildings in Camelford is the Town Hall, with its weather-vane in the shape of a golden camel. Built in 1806 by the Duke of Bedford, it was originally a market house, on the ground floor. A double flight of granite steps from Chapel Street leads to a separate entrance to the upper chamber. In 1906, this was still used for the Petty Sessions, County Court and the Education Committee. The building is now the town library.

Further afield is the quaint fishing village of Port Isaac, to the north the seaside resort of Bude and, to the east, historic Launceston. South-east lies Bodmin, formerly the county town of Cornwall. Wadebridge, to the south, is also on the River Camel, but nearer the beautiful estuary. Scenic Bodmin Moor is to the east and north of the town boasting attractive villages such as St Breward and Blisland.

Camelford is a great centre for touring, walking, fishing, swimming or surfing holidays. It is steeped in history and legend. The town has excellent shopping and sporting facilities.