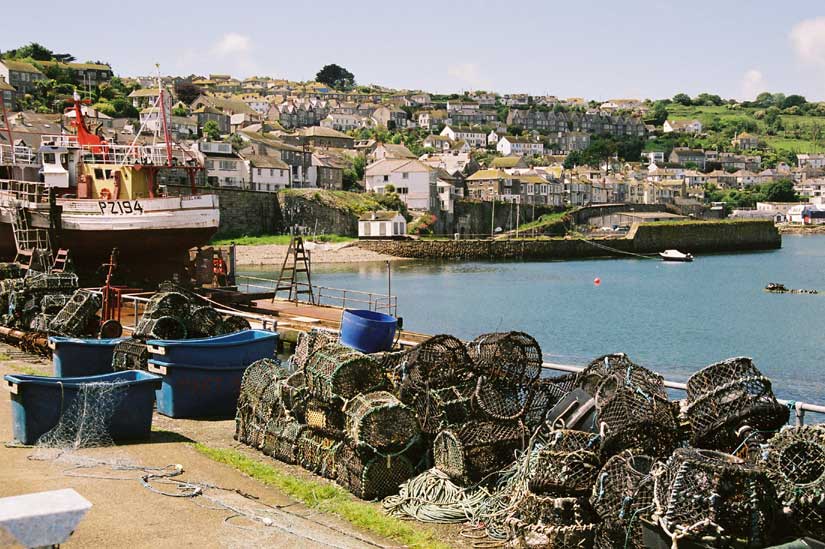 Newlyn is home to one of the largest fishing fleets in the United Kingdom, with over 40 acres of harbour. The industry is one of the most important in the county, contributing millions of pounds to the Cornish economy each year. All sorts of fishing vessels can be seen in the harbour - beam trawlers, long liners, crabbers and even small open boats used for hand-lining for mackerel in the Bay.

The port was sacked and torched by a Spanish raiding party in the 16th century, then rebuilt. Today, very little of old Newlyn remains. Many of the white painted or stone faced granite cottages, separated by steep, narrow alleys, were only saved from demolition be the outbreak of the Second World War. The medieval harbour walls are dwarfed by the hundred year old walls of the North and South Piers.

Newlyn has a few galleries and several chandlers but little else in the way of high street shopping. There are a number of "interesting" old public houses and several restaurants. Although not as famous as those of nearby Mousehole, Newlyn Christmas lights are launched annually to the accompaniment of the Newlyn Male Voice Choir and followed by a firework display.

It is worth rising early to visit the bustling Fish Market and to see the fish being sold. The fish is displayed in coloured rectangular baskets and ticketed awaiting auction. Some of the fish are destined for local restaurants, but most are sold to buyers from various other European countries, especially to France, Spain and Portugal. The Newlyn Fish Festival is held on August Bank Holiday Monday each year, when stalls and cafés take over the quays for the day.

The Pilchard Works museum has now closed and been converted into apartments. In the past it was where Cornish Salt Pilchards were pressed using screw presses and then packed into wooden barrels for export to Europe.

The Newlyn School was a group of painters who started the plein air movement in England, following the lead in France, where many of them trained. The group was lead by Stanhope Forbes and Walter Langley. Other painters in the group included Elizabeth Stanhope Forbes, Norman Garstin, T.C.Gotch, and Henry Scott Tuke. Several of the Newlyn artists were involved in the establishment of the New English Art Club in 1885/6. In 1899, Stanhope Forbes and his wife Elizabeth founded a School of Art at Newlyn. A second generation of Newlyn artists included A.J.Munnings, Lamorna Birch and Laura Knight. Important artists continued to be based in Newlyn into the 1920s, and many artists still live and paint in the area today.

Next to Newlyn Green recreational area on the sea front is the Newlyn Art Gallery. It was designed by Passmore Edwards and built in 1895 to display the works of the Newlyn School artists Today the gallery has a society whose members produce much only contemporary work. The work of The Newlyn School is now displayed at Penlee House Museum in Penzance.
View full size newlyn map