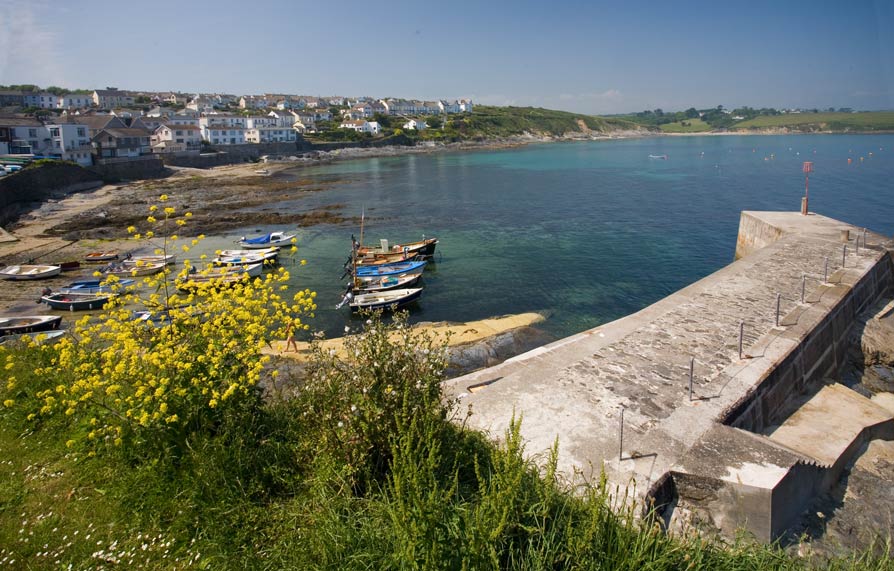 Portscatho lies in the South-westerly corner of Gerrans Bay on the Roseland peninsula. The East-facing cove affords shelter from the prevailing sou-westerly winds and this meant it was ideal as a base for the pilchard fleets of the eighteenth and nineteenth centuries and is still, although on a much smaller scale, an active fishing port today. The same shelter makes for safe swimming and its proximity to many fine sandy beaches means it’s a family favourite

In the village centre you’ll find several shops including a butchers and a decent grocery/off licence as well as the now standard galleries and gift shops. The Plume of Feathers pub serves up St Austell Ales and good pub grub.

Above Portscatho lies the village of Gerrans - only a five minute walk up the hill. Another decent pub, the Royal Standard can be found here. The mediaeval church that stands opposite has served as an invaluable landmark to generations of local fishermen.

As in many coastal communties a red-painted word war two mine stands above the harbour as a collection box for mariners charities. However adjacent to the one in Portscatho stands a unique memorial plinth dedicated to the 26,380 servicemen who lost their lives in the Burma war but who have no known resting place.

Take the cliff path North out of Portscatho and in under twenty minutes you’ll be standing on the beautiful Porthcurnick beach. At low tide, Porthcurnick has acres of flat sand, perfect for games of cricket but you might have to wade a fair way to get a decent swim!. It is a National Trust owned beach and toilet facilities are available. Further east still are Carne beach and Pendower beach which at low tide join to form an even bigger expanse of sand where dogs are allowed all year round.

To the West of Portscatho lies St Anthony Head, on which stands the lighthouse used in the TV series “Fraggle rock”. Between here are many fine beaches such as Towan and Porthbeor as well as the pretty hamlets of Porth and Bohortha. A day can be well spent doing a circular walk starting from Portscatho heading west on the coastpath to St.Anthony Head then on through the grounds of the beautiful Place House (formerly home of the Spry family) and St.Antony ‘s church before cutting inland to Froe, Bohortha or Porth and heading back to Portscatho. The National Trust owns much of the land round here and they’ve erected lots of useful signposts to stop you getting lost!
View full size portscatho map