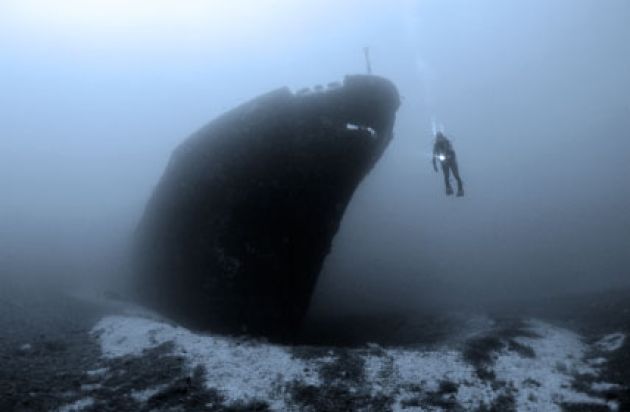 With so much coast it is little surprise that Cornwall is one of the UK's top diving destinations. The waters of cornwall are rich in both marine life as well as being the final resting place of many a ship, with several of these wrecks readily accessible.

The sea of Cornwall is warmed by the Gulf Stream and much of the underwater habitat is fairly pristine. This makes it perfect for a wide range of species such as various wrasse, dogfish, pipe fish, octopus, cuttlefish, anenomes, sea fans... the list goes on. There is also a chance of spotting some summer visitors such as oceanic sunfish and sea tutles. Seal and dolphin sightings are relatively common all around the coast whilst enormous basking sharks are regular visitors from May to June.

There are many dive sites around the Cornish coast which will suit everyone from the once a year snorkeller to the experienced SCUBA diver. Whilst diving goes on virtually everywhere off Cornwall's coast some areas are more popular, often due to practical considerations such as lack of suitable launch sites.

Amongst the most frequently dived areas are Falmouth Bay and the Lizard, which sit either side of infamous Manacles reef. This spectacular granite reef has been the cause of over a hundred shipwrecks, most famously the liner, Mohegan along with the Volnay. Across the coast in St Ives Bay are more great wreck sites, the St Chamond (locally known as the 'Train wreck') and the SS Kintuck, whilst a little way west is the Enrico Parodi.

Further north, around Newquay, there is some good diving to be had. One of the highlights is the wreck of the auxilary schooner Syracusa which went down in 1897.

Back on the south coast, Mount's Bay is a great place for divers of all levels. From snorkelling off Penzance's seafront to the popular , but more challenging diving off Lamorna Cove. A few miles further west is one of Cornwall's diving highlights, the Runnel Stone, a 30 metre grantic pinnacle rising from the ocean floor. This is home to the wreck of the City of Westminster and a plethora of marine life.

Diving goes on all year round in Cornwall but the seas here are at their warmest between July and October. This is also when the sea is likely to be calmest and you are most likely to see the widest variety of sea life.