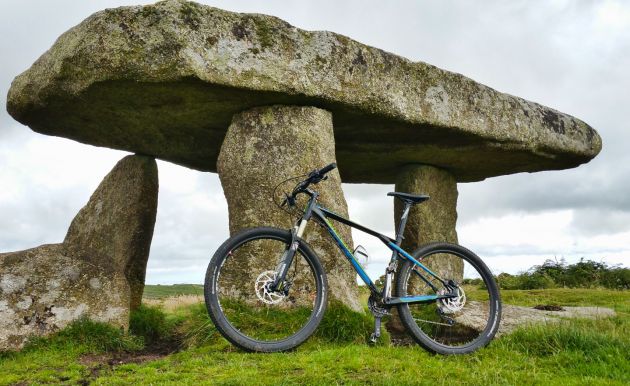 As a keen cyclist I feel blessed to live in Cornwall. Cycling in Cornwall has something for everyone regardless of what bike you ride or your level of fitness. There are limitless opportunities to get away from the hustle and bustle and cycle through some of the UK's most stunning scenery. The rolling hills, high moors and undulating coastal roads of Cornwall can be challenging but are rewardingly picturesque. And if you like hills, you'll love Cornwall - in West Cornwall for every mile you ride you climb 100 feet!

However, for those who don't fancy a strenuous ride on the roads Cornwall has an ace up its sleeve in the form of a number of cycle routes and cycle paths throughout the county. Together these comprise 180 miles of cycling, much of which is traffic free and forming part of the National Cycle Network. These include routes such as the Coast to Coast Mineral Tramways trail from Portreath on the Atlantic coast to Devoran on the south and the fairly genteel Camel Trail from Padstow to Bodmin. As well as being quite flat these routes have the advantage of being free of road traffic making them suitable for families with young children.

Without doubt the best known of the Cornish cycle trails is the Camel Trail. It stretches from the North Coast harbour town of Padstow along the banks of the River Camel before heading inland to Wadebridge, then Bodmin and up on to Bodmin Moor beyond. The trail is often considered as the 11 miles (18km) from Padstow to Bodmin with the 6 miles (9km) up to Blisland on Bodmin Moor considered additional. This makes sense as the character of this last section is somewhat different and more challenging than the genteel section along the banks of the River Camel.

As the longest established of the trails there are plenty of places to hire bicycles and no shortage of stop off points for refreshments. This is a great trail for families as it is traffic free and generally flat.

The Mineral Tramway trails are a 37.5 mile network of traffic free routes based on the old transport network of the 19th century mining era. Offering the opportunity of exploring the countryside and mining heritage to all, there are also great views and abundant wildlife.

Coast to Coast Trail (11 miles / 17.5 km)
As the name suggests this trail reaches from the harbour of Portreath on the North Coast to Devoran on the South. It more or less follows the old Portreath Tramroad and Redruth & Chacewater railway so is relatively level as well as taking in Cornwall's mining heartland.

Great Flat Lode Trail (7.5 miles / 12 km)
This trail is set amongst the mines that worked the Great Flat Lode. It circles the hill of Carn Brea behind Camborne and Redruth taking in some of Cornwall's finest old mine workings.

The Tehidy Trail (2.5 miles / 4km)
Set within the confines of Tehidy Country Park this trail is popular with families. It is traffic free and mostly flat.

There are more trails within the Tramways network including the The Portreath Branchline Trail and The Redruth & Chasewater Railway Trail, details of which can be found on the Mineral Tramways Trails page.

The Clay Trails are located around the south coast town of St Austell and are a network of routes exploring this fascinating post-industrial landscape. For over 300 years the area was the centre of the China Clay industry and this has left its indelible stamp on the shape of the land around here. Where there were clay pits there are now turquoise lakes and where there were spoil heaps there are now strangely shaped miniature mountains.

The trails themselves are multi use but virtually all are cycle friendly. There are several interlinking trails:

Pentewan Trail (2.5 miles / 4 km)
Follows a former railway line from near Mevagissey and continues to the town of St Austell. It is reasonably flat and bicycles can be hired at Pentewan.

The Green Corridor (2 miles / 3.5 km)
This route joins St Austell with Wheal Martyn which was at the centre of the china clay industry. It follows the green countryside past Tremena Gardens finishing at the China Clay Country Park.

Wheal Martyn Trail (5 miles / 8 km)
Running from Wheal Martyn to the Eden Project this trail is a little rougher than some of the others. The route takes in many of the china clay workings and has some great views over the countryside.

St Blazey Trail (3 miles / 5 km)
A short and varied trail running from the village down to Par beach taking in the industrial landscape and finishing in a nature reserve.

The Cornish Way is slightly different to the previous trails in that only a small percentage is completely traffic free (29 miles). The rest of the route has been designed to avoid major roads and take in as many of Cornwall's best features as possible. This 180 mile (288 km) cycle route runs the length of Cornwall from Bude to Land's End (and back) via 2 routes; one taking in Padstow on the North coast, the other St Austell on the south.

The route is generally split into several sections, including the already mentioned Camel Trail:

The First and Last Trail - Land's End to Hayle (22 miles / 35 km)
Not too hilly and taking in the fishing village of Mousehole, town of Penzance, Marazion (home to St Michael's Mount) and Hayle on the opposite coast.

The Engine House Trail - Hayle to Truro (18 miles / 29 km)
So named because it includes sections of the Mineral Tramways Trails, the historic industrial heartland of Cornwall. Largely traffic free this route is both beautiful and fascinating.

The Coast and Clay Trail - Truro to St Austell (40 miles / 64 km)
Starting off in Cornwall's cathedral city, Truro this route takes in the beautiful scenery of the Roseland Peninsula before reaching the coast near Mevagissey. The trail then takes in some more of Cornwall's industrial heritage, China Clay Country.

The St Piran Trail - Truro to Bodmin (33 miles / 53 km)
This is an alternative to the St Austell section and slightly less hilly. The route goes cross country before making the coast at Newquay. It then returns inland before hitting the coast and beautiful beaches around Padstow.

The North Cornwall Trail - Bodmin to Bude (35 miles / 56 km)
This route skirts the northern edge of Bodmin Moor with its stunning and rugged scenery. The trail reaches the coast shortly before Bude taking in the coastline around Widemouth Bay.

Sportives and other organised rides

Over recent years 'sportives' have been gaining popularity. These long distance events are organised by clubs or other bodies and generally range from 50 to 100 miles in length. The advantage of a sportive is you get to ride with other cyclists, there are feeding stations and there is mechanical / medical support provided. The routes are also carefully planned using local knowledge and take in some of the most challenging roads in the area.

As of 2012 the Festival of Sport was held in Marazion with a 40, 60 and 100 mile course offered. All routes involved the challenging terrain of the West Cornwall coastal road. The event was very popular and plans are to make this an annual event to be held in mid September [ Sorry, just read this has been cancelled :( See the Land's End 100 below as a possible replacement].

Another sportive is held on and around Bodmin Moor. Previously the Cornwall Tor, the event has been renamed the Bodmin Moor 100 and will be run towards the end of July. Again there is a range of distances but all should prove a serious challenge. There will also be a Land's End 100 event held in West Cornwall.