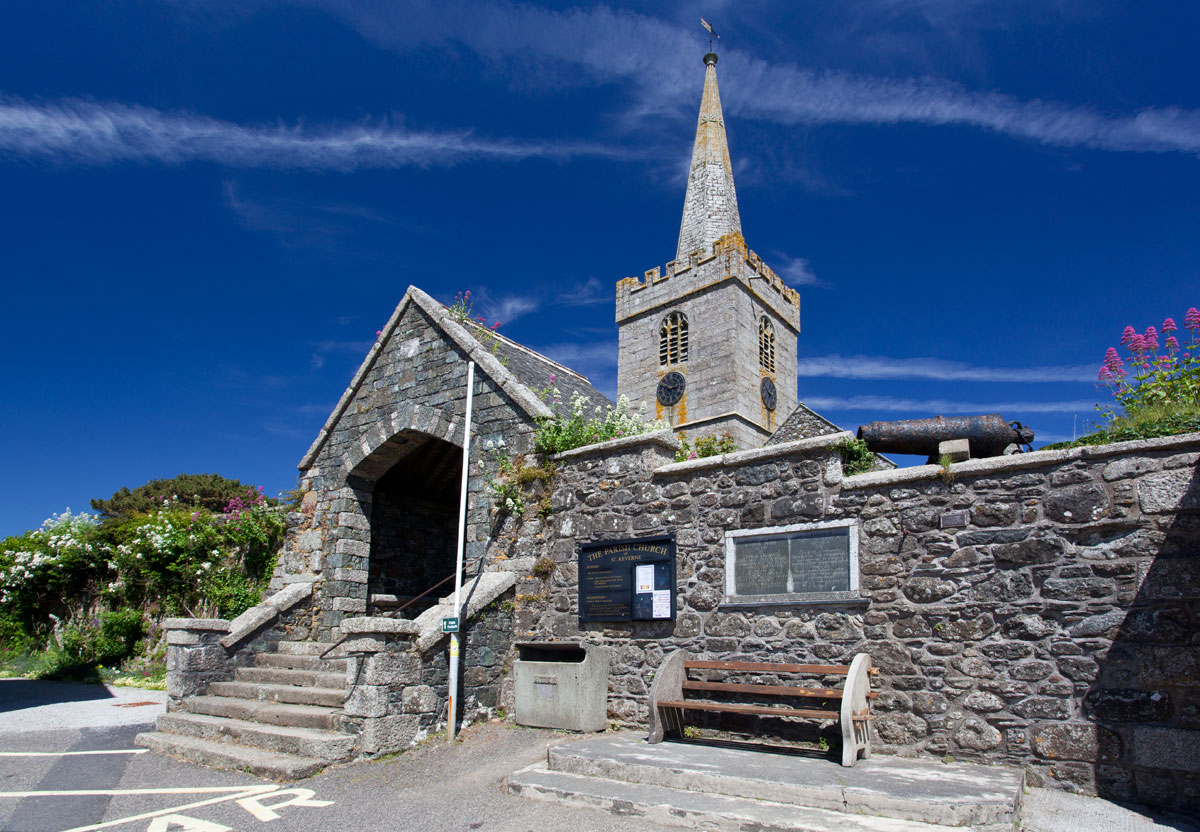 St Keverne is the largest village in the Helford area and somewhat unusual (for Cornwall) in that it is clustered around a central square. This attractive square contains a number of shops, 2 pubs (the White Hart and the Three Tuns), a handful of cottages and is overlooked by the church of St Akeveranus.

The 15th century church is fairly large, but in typical Cornish manner, squat. It does haowever have a fairly distincitve tower with an octagonal spire. It is thought the spire was added to make the church an even more prominent daymark for mariners and to warn of the treacherous Manacles Reef just over a mile off shore. The name Manacles was derived from the old Cornish Maen Eglos meaning "Church Rocks".

The Manacles reef consists of a square mile of barely submereged rock and over the years it has claimed a staggering amount of ships with some saying as many as three thousand ships and countless hundreds of lives lost. A quick look around St Keverne churchyard is tesiment to this loss of life with over 400 victims buried there. Grave stones and memorials exist to ships such as the John, the Bay of Panama, the Primrose and the Dispatch which were both wrecked on the same night with a loss of over 250 lives, and perhaps the most well known, the Mohegan. The liner SS Mohegan struck the reef on 14th October 1898 with the loss of 106 lives, the captain's headless body was washed ashore 3 months later. A number of these were buried together in the church graveyard where a simple memorial stands. A memorial stained glass window was also donated to the church by he Atlantic Transport Company.

The barque John was an emigrant ship with 263 people onboard destined for a new life in Canada. The story goes that on the 3rd May 1855 after sailing from Plymouth the John struck the Manacles and was holed. The ship began to take on water but was still above the water half an hour later. The captain, Edwin Rawle, told the passengers there was no danger, and to prevented the launch of the lifeboats. He told them help would come before the tide returned. However, his knowledge of the tides was flawed and as a result 196 lives were lost. But it gets worse. It was alleged that once the tide began to rise the crew climbed into the rigging and cracked open the liquor, not one of them died and when the boats arrived from shore the crew were ready to step into them with their bags.
In the subsequent trial Rawle was found guilty of manslaughter and the crew repremanded for cowardice, selfishness and inhuman behaviour.

The two best known Cornish rebellions have their roots in St Keverne. The 1497 Cornish Rebellion and the 1549 Prayer Book Rebellion
One of the leaders of the first uprising was the village blacksmith Michael Joseph (An Gof). The protest was against the raising of war taxes by King Henry VII on the impoverished Cornish tin miners which went against previous rights granted by Edward I to the Cornish Stannary Parliament with regards to taxation. At this time Cornwall was still very much a nation and most people spoke Cornish. It was felt that the war with Scotland was not their quarrel and they should not have to pay for it.

Along with lawyer Thomas Flamank, Joseph led an army of 15,000 marchers to Deptford Bridge just outside of London where they were met 25,000 of King Henry's soldiers. The Cornish were soundly beaten and Joseph and Flamank subsequently hung, drawn and quartered.
In 1997, to celebrate the 500th anniversary of the uprising a bronze statue of Michael Joseph an Gof and Thomas Flamank was made by Terence Coventry a local sculptor. There is also an earlier memorial stone set in the church wall, facing the square.

St Keverne's other martyr to the Cornish cause was the village priest Martin Geoffrey. In 1547 as part of Edward VI's protestant reformation the Book of Common Prayer in English replaced the four old Latin books. The change was widely unpopular amongst the traditionally Catholic Cornish. The reformation also extended to banning traditional certain religious processions and pilgrimages and the removal of all catholic references. This was carried out under William Body who started by destroying catholic imagery in Helston church. Not long after a mob of over a thousand men assembled to join a group of parishioners from St Keverne led by Martin Geoffrey. The incident ended with Body being dragged into the street and stabbed to death.
In a wave of retribution 28 Cornishmen were executed at the aptly named Castle Terrible. Martin Geoffrey was taken to London for execution and his head impaled upon a spike on London Bridge for all to see.