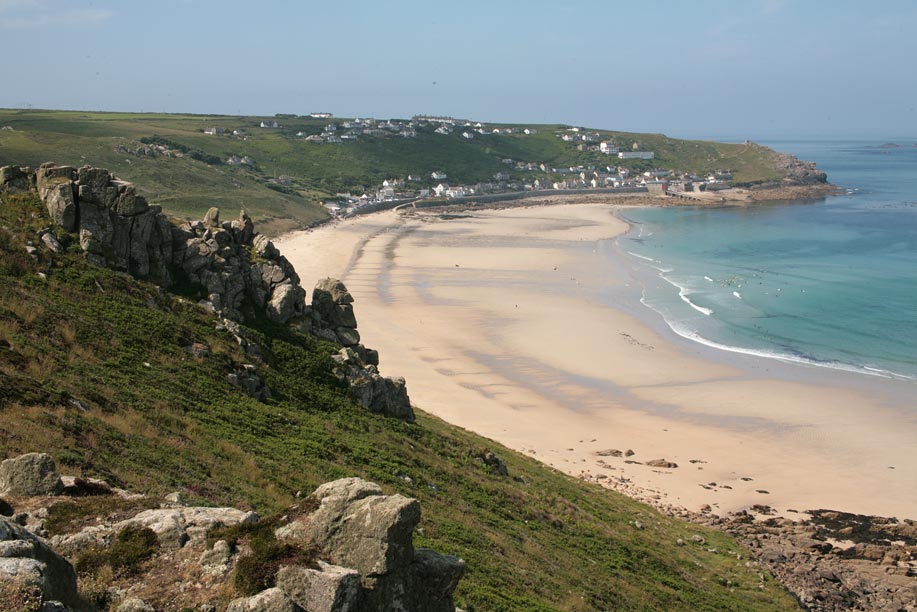 Sennen Cove boasts one of the loveliest stretches of sand in Cornwall, Whitesands Beach, and still retains much of the atmosphere of an old fishing village. Tucked away, just behind Land's End the cove receives the full force of the Atlantic ocean making it a popular spot with surfers and hosting the UK's oldest surfing club.

The Old Success Inn is a 17th century building with views across the bay. The cove was once frequented by many mermaids, in addition to the Sennen Whooper. Perhaps these mermaids were really dolphins, which can still be seen frolicking in the water close to the coast. A nearby rock is known as the Irish Lady and is the memorial to the sole survivor of a long ago wreck. Unfortunately she fell into the sea before she could be rescued, but her ghost can sometimes be seen still clinging to the rock.

There is still a lifeboat station at Sennen and close by there are lobster pots testifying to the continuation of the local fishing industry. The Round House and Capstan gallery is a 19th century building with a converted net loft and can be found just beyond the lifeboat station. Sennen Cove is very close to Land’s End and is well placed for walks along the coastal path. There are numerous ancient sites in the area in addition to relics from the once thriving tin mining industry.

To the east, at the top of the Penberth Valley, lies Penrose, once the seat of the family of that name. In the 17th century a recently widowed smuggler, Ralph Penrose, took his young motherless son with him to see, leaving his brother to manage his estate. There was a storm and his ship was wrecked just off the coast. His brother, John, watched the ship go down without trying to help. When the young boy managed to struggle to shore, he was murdered by his uncle’s men. Ralph’s cousin, William, survived the wreck but lost his memory until he returned to Penrose by chance. There he discovered the grave of his cousin’s young son and traced the murderer, who confessed and hanged himself. Unfortunately, William was unable to remain at Penrose because it was infested with ghosts.

Between Sennen and Land’s End lies the lonely farmhouse of Brea. This was built on land originally held by Count Robert of Mortain and farmed by his tenant Erchenbald at the time of the Domesday Book. The farm was small but had its own chapel, which survived until the 18th century. Facing the farm is the hill Chapel Carn Brea on which a fire is lit by the druids on Midsummer’s Eve. On this summit are the remains of a Neolithic chamber tumulus. The latter monument was previously concealed beneath another chapel dedicated to St Michael.