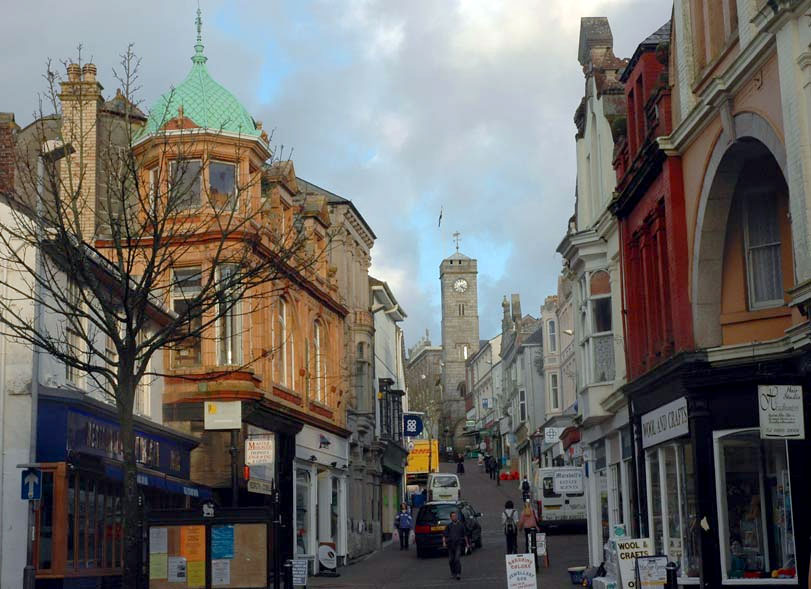 The village of Redruth began to take shape in the 12th century. It developed around the ford, some distance away from the parish church. This was typical of many Cornish parishes. The church with its surrounding cottages, is overlooked by Carn Brea across the parish boundary. The oldest part of the present building is the tower, built in 1490. The body of the church was enlarged in 1756 to accommodate a growing number of parishioners.

At the bottom of Coach Lane are reminders of the more recent past. The car park on the left was the site of the town's first railway station, when the line from Redruth to Hayle opened in 1838. By 1852 the railway had been extended to Penzance in the west and Truro in the east. The viaduct, over the centre of town’ was built at this time, originally of wood, and the present station was opened. Fore Street has been Redruth’s main shopping street since the early 18th century. On market days in the 19th century it was packed with stalls selling everything from limpets to pianos.

The Lamb and Flag Emblem is used by Redruth Town Council as the emblem for the town. It was originally a mark used by Cornish tin smelting works to stamp the ingots of tin. The symbol seems to have been used first in the woollen trade during the Middle Ages. By the 19th century, it was suggested that the lamb represented purity, obviously a good selling point for the local tin smelters.

The name Redruth is said to be derived from the fact that by the 14th century the stream running along the bottom of Fore Street was so discoloured with iron oxide from tinning activities that it ran red. Hence Redruth, the cornish for ford is rhys and red is ruth.
Another (dubious!) story is that the town is named after the colour of a St Ruth’s cloak. It was said that no child baptised with the water from St Ruth’s Well near Protreath would ever be hanged.

Redruth’s recently restored railway station is early nineteenth century. Many of the buildings on Fore Street, the main shopping area, are of a similar period. The street is dominated by the old clock tower.

Murdoch House was the home of inventor, William Murdoch, and is believed to have been the first house in the world to have been lit by piped coal gas. Today, it houses the Global Migration Project and tourists call there to trace their Cornish ancestors.

During the summer months, Redruth holds several continental markets. The Redruth Town Trail is a short walk through the town, featuring places of historical and other interest. There is a cinema in the main street and several restaurants and cafés in the town.

Nearby Gwennap Pit is where John Wesley preached his sermons. Tolgus Tin Stream Works is an ancient monument to Cornwall’s old tin industry. Carn Brea Leisure Centre is close to Redruth. The town is ideally situated for visits to both the north and the south Cornish coasts. Tehidy Country Park is not far away and offers a good day out for the whole family.