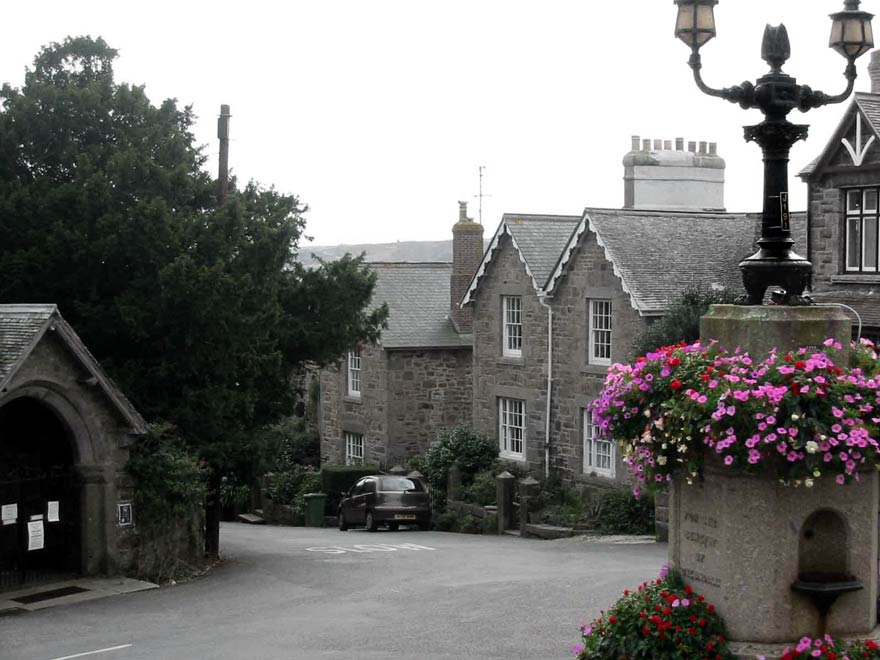 Overlooking Mounts Bay is the village of Gulval, a charming collection of victorian houses and cottages arranged around what was the village square.
The town is thought to be named after St Wolvela (W is a common corruption of G), a female saint of whom little is known. It has however also been suggested that it may have been named after St Gudwal, a monk of British origin who lived in Brittany.

The Bolitho family were the predominant landowners in the parish of Gulval and were responsible for building many of the granite houses, the almshouses and Lanisley Hall in the early 1900s. The name Lanisley or Lanesly is the original name of the parish derived from the old Cornish Lan meaning church and ishei lower.

The church also has references to the Bolithos with several memorials in the graveyard. Within in the circular churchyard are also the 'Pirate's Grave' - the gravestone is of John Thomas (!) of Marazion, a pirate and smuggler. It is said that his local parish of Marazion refused to bury him as he was a criminal - his family had to pay the Parish of Gulval to take him.

The churchyard also contains a holy well which is said to have the power of dispensing information to worried girls about absent lovers. The girl was required to gaze into the well and chant a short verse - if the water was clear all was well. Cloudy water spelt trouble!

The church itself is particularly pretty and dates back to the 14th century with the current tower being built in 1440. Encircled by a stone wall with a large stone lych gate built in 1897 to celebrate Queen Victoria's Jubilee.

Other features in the village include the 1910 granite drinking fountain in the centre of the square and the Coldstreamer Inn, allegedly one of the oldest in the duchy.

As one approcahes the sea and Eastern Green there are several more recent industrial and housing developments including Europe's first heliport where flights to the Scilly Isles depart.

In the opposite direction are several Iron Age sites icluding Chysauster, Bodrifty Settlement and Castle-an-Dinas - which is also the site of an interesting 18th century folly known as Roger's Tower.