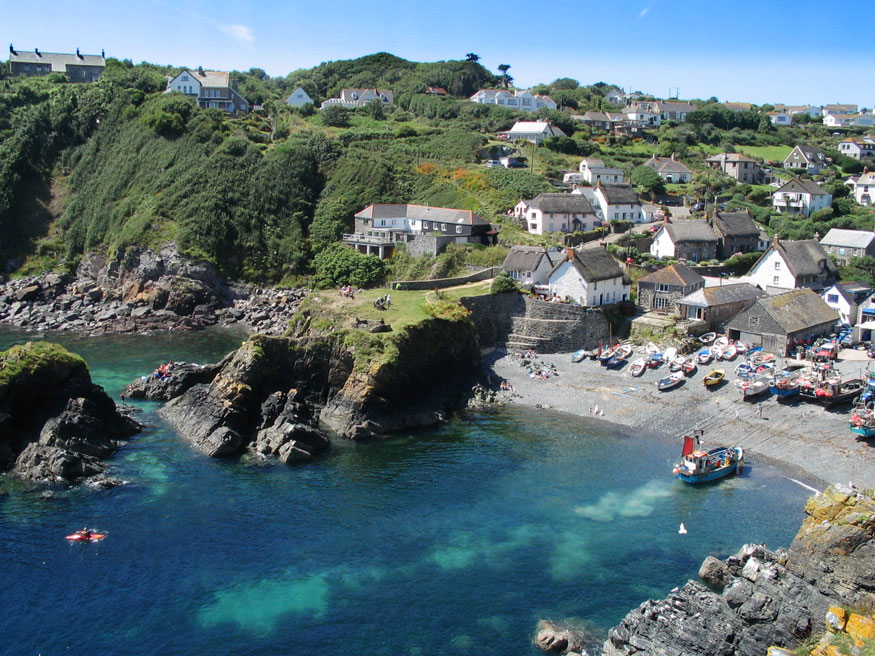 Cadgwith is everybody's idea archetypal fishing village with its tight cluster thatched cottages lining the sides of the valley and the small fleet of colourful fishing boats winched up on the shingle beach. The fact that the boats are still in use and the local pub (The Cadgwith Cove Inn) is reknown for it's singing of Cornish songs of a Friday evening is testiment to the traditional character of this village still being alive and well. The village also has a thriving gig club.

The reason the rooves are thatched is due to the fact Cadgwith is about as far from the slate producing regions like Delabole as you can get in Cornwall. I read somewhere that the rooves are held down with chains attached to boulders during stormy weather - of which there is plenty in the winter. Having said that the cove's orientation offers some protection from the prevailing south westerly winds that blow the strongest.

The cottages themselves are made out of the local serpentine rock with walls measuring up to 4 feet thick. The rock is then faced with cob, a mixture of clay and straw before being painted white. The cottages have some quite charming names such as Kiddleywink, Tamarisk and Rose Cottage.

The cove has two small beaches - the fishing beach in front of the town where the slipway is right on the road. Seperating this from the adjacent (swimming) beach is a small rocky outcrop called the Todden. The large cliff to the south of the cove is known as the Man o' War.

Just to the north of the village is 'The Devil's Frying Pan' - an enormous 200 foot deep hollow in the cliffs that is the result of the roof of a sea cave collapsing.