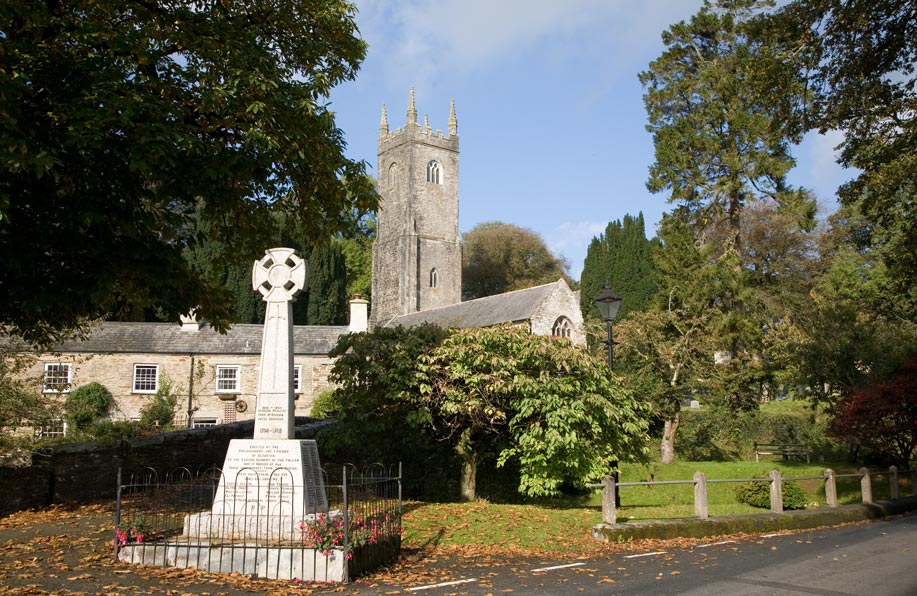 altarnun is named in the domesday book as penpont but takes its present name from the 6th century church of st nonna , where st nonna’s altar was originally preserved. several legends of early celtic saints describes how they used to carry a portable stone altar with them. the modern spelling of altarnun is a corruption of the earlier altarnon. nonna was the mother of st david and is the patron saint of pelynt near looe , and dirinon in brittany in addition to altarnun.

the very fine cornish cross at the entrance of the churchyard may date from the days of st nonna but nothing further remains of her church. the font and a portion of a capital built into the north wall of the vestry are part of the remains of the 12th century norman church. most of the present church dates from the 15th century. it is built mainly from unquarried stones from the moors, but partially from the stone of the earlier church and also from the former mansion of the trelawney family who lived nearby. the tower is 109 feet high and took more than a generation to complete. it is known as the cathedral of the moors . one of its main features is a signed series of 79 bench ends carved by robert daye during a twenty year period from 1510.

the holy well of st. nonna is a short walk from the church, in a field below the vicarage. it was restored by morley brown who bought the land and cleared the water course. the well was famous as a bowsening pool, which was a place where lunatics were thrown backwards into the water. this was believed to deliver a short sharp shock which hopefully effected a cure.

the rectory, built in 1842, is featured in the novel “ jamaica inn ” by daphne du maurier , who was said to have been a visitor to the house. opposite the village green, a long white building was originally the village alms houses and not far away is the church hall which used to be the local school. a two week exhibition of paintings and crafts is held here annually during the last week in july and the first in august. the village also holds a carnival in the third week of each august.

the village nestles in the valley of penpont water , a tributary of the river inny , and is probably one of the prettiest in cornwall. there is a 15th century packhorse bridge across the river. the village itself boasts many attractive granite buildings. the village shop was originally the ring o’ bells inn and next door is the 18th century methodist chapel, notable for the carved head of john wesley above the door. this was crafted in 1836 by a local craftsman, nevil northey burnard , who became famous when he sculpted the head of edward vii , then prince of wales and duke of cornwall.