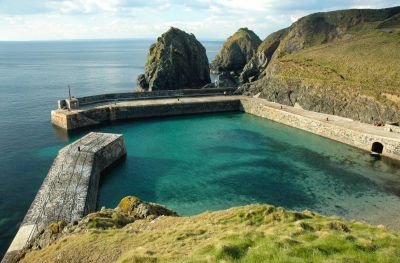 Mullion is the largest village on the Lizard and has shops, inns, cafes and restaurants, craft shops and art galleries. There is a golf course close to Mullion. This area has plenty of holiday accommodation, ranging from self-catering to hotels.

In the centre of the village, the mainly 13th century church of St Mellanus is renowned for its richly-carved oak bench-ends depicting biblical scenes, including that of Jonah and the Whale. In the main 13th century door is a dog door, a similar idea to the cat flap in modern doors. Such doors are often found in churches and were intended to allow sheep dogs to pass freely in and out The roof is of the Cornish barrel type and the original timbers were supposed to have come from the Goonhilly Forest covered Goonhilly Downs which in mediaeval times. There are no nails in the oak timbers, which are wood-pegged. The 13th century octagonal font has and a serpentine motif on one of its sides. The studs in the North door are wooden rather than iron. It is made of oak and is thought to date from the 11th century. 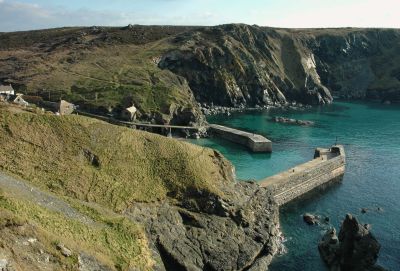 The dramatic Mullion Cove is a must. It is owned by the National Trust and has a pretty working harbour, protected from the winter gales by stout sea walls. The harbour was completed in 1895, when pilchard fishing was the main local industry and is still used by local fisherman. The old pilchard cellar and net store can still be seen. Another unofficial local industry was smuggling.

The cove had a lifeboat station from 1867 until 1909, as there were frequent wrecks under Mullion cliffs along a stretch of dangerous coastline. Inland there are the remains of Wheal Unity copper mine, which operated for about 200 years from the early 18th century.

Walks along the cliffs are well worth the effort. There are some stunning views from the coastal footpath. Nearby Poldhu Cove is an ideal family beach, famous for another reason. In December 1901, on the cliffs above Poldhu, Marconi conducted his famous experiment in trans-Atlantic radio communications. The beach is backed by sand dunes and has a large car park nearby. 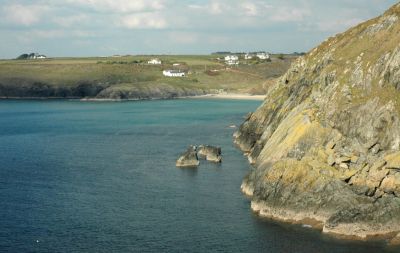 The main beach for holiday makers is at nearby Pollurian Cove. This is nearer to the Mullion village than is Mullion Cove and can be accessed by a footpath on an attractive walk along the cliffs. It is a sandy beach popular with surfers. The coastal path runs through Polurrian Cove, along the cliffs, down through Mullion Cove and up again on to Predannack Heath. It is an exhilarating walk, of special interest because, in recent years, cliff grazing has been reintroduced to the heath in order to allow regeneration of the rare plants that used to grow here. Many of these are only found in this area of the Lizard.