Samson is the largest of the uninhabited islands on Scilly and easily recognisable from its twin hills joined by a narrow isthmus of sand. 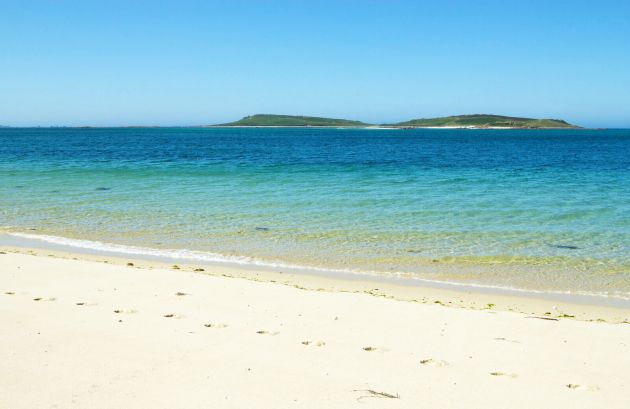 Sitting less than a mile across the shallows from Tresco it is actually possible to wade across to Samson on the lowest of spring tides. In fact around 500 years ago the islands were joined by land, and going even further back all the islands formed one large land mass known as Ennor.

Like a number of the other larger uninhabited islands on Scilly, Samson is named after a Celtic saint, Samson of Dol who visited here in the 5th century. There are also numerous prehistoric sites on the island dating back to the Bronze and Iron Ages, which are concentrated on the two hilltops.

South Hill is home to a number of Bronze Age entrance graves, while North Hill has a mixture of burial cists and entrance graves. It isn't hard to see why these prominent points on the western fringes of the islands would have had such significance. Even today looking out over the Atlantic towards the setting sun feels like you are on the very edge of the world.

At the foot of North Hill, beyond the tide line, are the submerged remains of Iron Age fields walls. These fields once stretched across the flatland to Tresco and would have been used to contain livestock, but as the sea levels rose the walls were put to a different use - to trap fish. 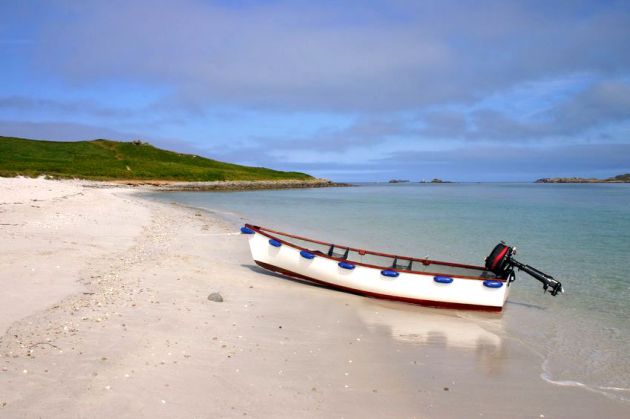 Samson was inhabited until 1855 and at the turn of the 18th/19th century 50 people lived here. However theirs is a story of hardship and sad decline. They tried to live off the land but the island wasn't really big enough to support them. With no wood to burn, barely enough water and a diet consisting of nothing more than potatoes and limpets life on Samson was pretty dire.

Through the mid 1800s the population of Samson dwindled and eventually after a series of droughts the Scilly Isles Lord Proprietor, Augustus Smith, stepped in and moved the last two remaining families off the island. The inhabitants of Samson left behind a number of small granite cottages which have fallen into ruin over the years. Today, all that remains of most of the cottages are some low granite walls, but outside each cottage you can still find the mounds of limpet shells the unfortunate residents were forced to survive on.

After the residents had left the island Augustus Smith attempted to turn Samson into a deer park. However, this didn't go to plan as most of the deer tried to escape - some managing to wade across the shallows to Tresco and others dying in the process.

Perhaps more so than any other island on Scilly, Samson has featured as a location in various stories. Whilst the sad tale of the island's gradual demise may have inspired some of these, the oldest go back to medieval times. In the story of Tristan and Iseult the island is where Tristan battles and kills the Irish knight Morholt, leaving a piece of his sword in the Irishman's skull.

More recently, in Sir Walter Besant's 1890 novel, Armorel of Lyonesse, the cottage on the west slopes of South Hill is used as the setting as the heroine Armorel's home.

Samson is also central to the plot of Michael Morpurgo's Why the Whales Came. In the book, which was later made into a film, the island is under a curse which needs to be lifted to save the whales.