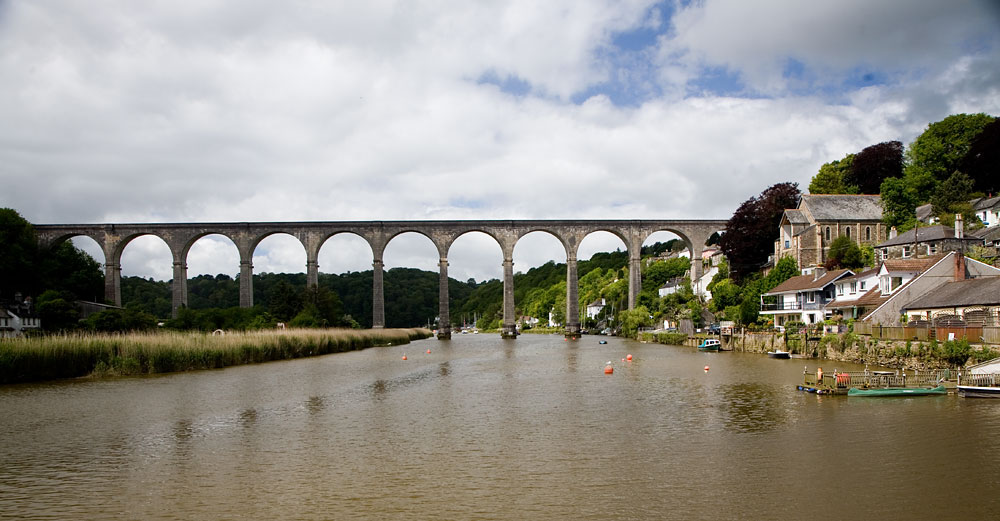 The village (and parish) of Calstock is situated on the River Tamar several miles east of Callington and 12 miles upstream from Plymouth in an Area of Outstanding Natural Beauty. It is a pretty village with cottages lining the narrow streets as they climb up the steep bank of the Tamar.

Calstock is dominated by the magnificent railway viaduct which was built in 1907 and is one of the last great railway viaducts. Standing at 120 feet tall with 12 sixty foot arches, the viaduct carries the Tamar Valley railway which runs from Plymouth to Gunnislake.

About a mile down the Tamar is Cothele, a mediaeval/Tudor house and estate now owned by the National Trust. Built between 1485 and 1627 it is a fine example, and considered one of the least-altered houses of the period in the United Kingdom. Along with the restored working watermill, the riverside gardens and quay are well worth a visit.

Whilst now-a-days Calstock is a fairly sleepy backwater it has a long history as an industrial post. In Roman times it was already settled and possibly a tin trading post and from Saxon times it was definitely a port.Calstock's heyday was in the 19th century when it was a booming mining town with a population of around 7,000. Copper, tin, tungsten and even silver were mined here and there was a granite quarry neaby. These were then all shipped downstream from the town's quay.

However, with the decline in the mining industry Calstock became a sleepy riverside village with the remains of the engine houses as a reminder to its past fortunes.
Although the Tamar is still navigable by small boats up to Calstock, the railway replaced it as the primary source of transport.