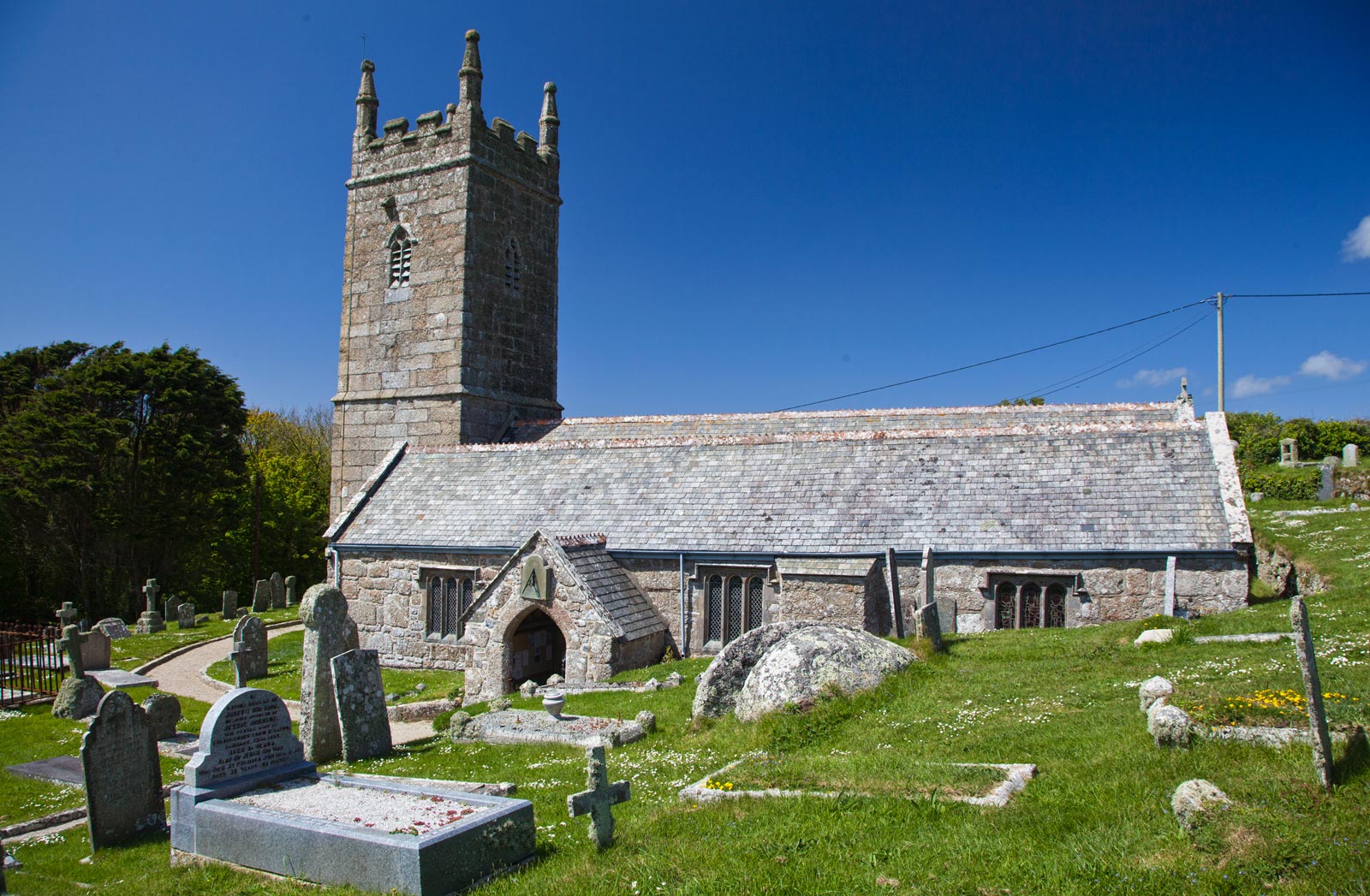 St Levan is a rural parish at the tip of West Cornwall, bounded to the north west by Sennen, to the north east by St Buryan and to the south by the sea. The parish is largely rural and consists of scattered villages, farmland, cliffs and isolated sandy beaches.

The parish church of St Levan is medieval in origin although it was heavily rebuilt in the twelfth century and extended in the fifteenth. St Levan, in Cornish 'Selevan', believed to be the Celtic form of Salomon, is thought to have lived in the sixth or seventh centuries and may have links to St David's in Pembrokeshire, Penmon on Anglesey and Lansallos in Cornwall. The church tower contains three bells dating from 1641, 1754 and 1881.

St Levan's Holy Well and the remains of an ancient chapel are located on the cliffs beyond the church, above a popular sandy beach known as Porthchapel. Porthchapel is subject to dangerous currents and big swells, is only accessible by foot and has no facilities or lifeguards.

St Levan Churchtown lies at the end of a narrow lane that first passes through Porthcurno. Home to another popular sandy beach that joins up with several others at low tide, Porthcurno beach rose to prominence in the late nineteenth century as the place where early transatlantic submarine telegraph cables were landed. In 1872 the Eastern Telegraph Company took over the operation of the cables and built a concrete cable hut, which stands preserved today at the top of the beach.

The Eastern Telegraph Company expanded through the late nineteenth and early twentieth centuries until in 1928 it merged with Marconi's Wireless Telegraph Company, which was renamed Cable and Wireless Ltd in 1934. For a time, in the inter-war years, the Porthcurno cable office became the largest submarine cable telegraph station in the world. In 1950 Cable and Wireless opened an engineering college in Porthcurno offering courses in branches of telecommunications to students from across the globe. Although the cable office closed in 1970 the college remained open until 1993, after which some of the less attractive buildings were demolished and others turned into holiday houses and flats. Shortly after the college closed, the award-winning Porthcurno Telegraph Museum opened, with visitors gaining access to the formerly top-secret 'Tunnel', which was bored into the cliff face by local mining engineers in 1940 to protect essential telegraph equipment from enemy attack.

Porthcurno beach still plays an important role in international communications with six new very high capacity fibre-optic cables landing in recent years. Depending on the state of the sand, the massive cables can sometimes be seen running up the beach.

On the cliffs above lies the world famous open air Minack Theatre, carved out of the rocks on the instigation of Rowena Cade, who lived at the imposing Minack House during the early part of the twentieth century. Shows take place every day during summer and there is an exhibition centre open to visitors. There is a huge and unattractive car park in Porthcurno, which retains some of its former utilitarian architecture as well as a shop, the Cable Station Inn and a beach cafe.

At the far side of the bay is Treryn Dinas, an impressive Iron Age cliff fort with well-preserved banks. The Logan Rock is located here, a rocking piece of granite dislodged by drunken sailors who were then ordered to replace it at great financial cost to themselves. The original receipt for works carried out is on display at The Logan Rock Inn, in the attractive village of Treen. There is a campsite between the beach and Treen, which has a pub and a seasonal cafe. To the west of Porthcurno lies the remote fishing hamlet of Porthgwarra, from where the coast path follows stunning and empty coastal scenery to Land's End.