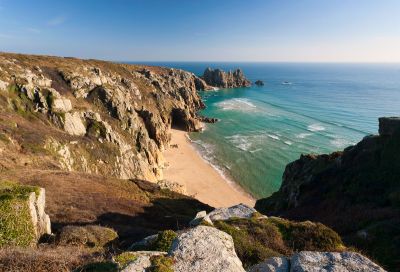 The clifftop view of Pedn Vounder beach and the cliffs of Treen beyond. The name is from the Cornish 'pedn', meaning head or end and 'vounder', meaning lane. The first word is pronounced 'pednee' and this is what it is often referred to round these parts. Locals know Pedn as the areas most popular naturist beach. This photo was taken in February so there wasn't much of this going on! Pedn Vounder is the eastern end of the bay that makes up Porthcurno cove. This is undoubtedly one of the most beautiful spots in Cornwall, or anywhere for that matter.

The beach here also featured in the recent Poldark TV adaptation where it was used in a dream sequence of "Nampara Cove".