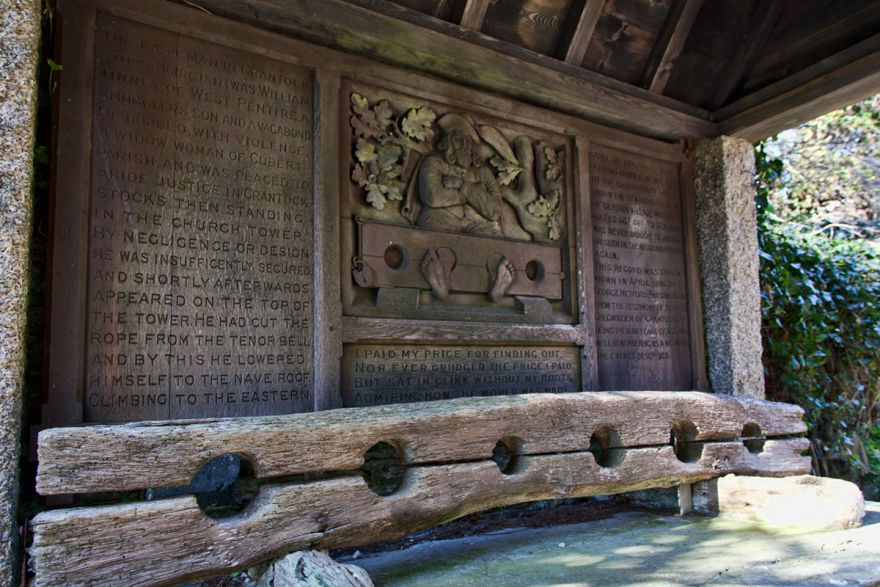 Situated just behind the church in the village of Crantock are this set of 17th century stocks. Originally these wouldn't have been hidden away but probably set up in the middle of the village for maximum humiliation. As you can see there are six holes in the stocks, sufficient to lock in three petty criminals in a row.

The stocks are housed in a structure that was put up around 1900 along with the wood carving which was carried out by Davey & Bushill, Bristol

The verse in the middle reads:

I paid my price for finding out

Nor ever grudged the price I paid

But sat in clink without my boots

Admiring how the world was made

The other panels tell the story of the last man to be put in the stocks:

The last man in Crantock stocks (circ. 1817) was William Tinney of West Pentire, a smuggler’s son and a vagabond. He robbed, with violence, a widow woman of Cubert Parish, and was placed, to abide justice, in Crantock stocks, then standing in the church tower. By negligence or design he was insufficiently secured, and shortly afterwards appeared on the top of the tower. He had cut the rope from the tenor bell and by this he lowered himself to the nave roof. Climbing to the eastern gable of the choir and sliding down it, he dropped to the churchyard grass and in the sympathetic view of certain village worthies bolted, got off to sea and was never brought to justice or seen in the neighbourhood again.

This record was taken down in April 1896 by George Metford Parsons, Vicar from the testimony of Richard Chegwidden of Crantock, he being then 88 years of age and well remembering as a witness the events described.