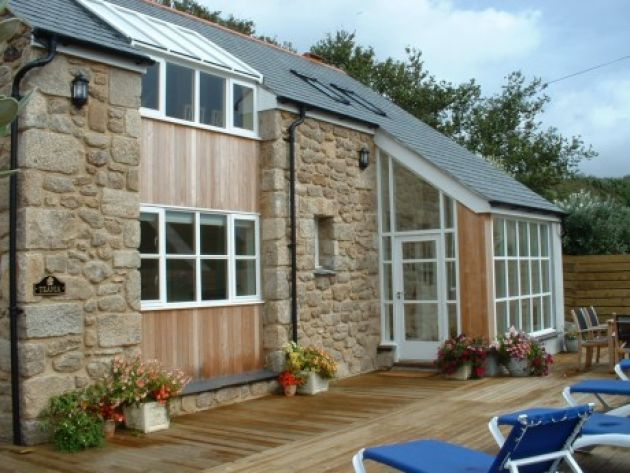 ''A Holiday For All Seasons...'' A superb,newly built family cottage with 2 double or twin bedded rooms,available for rental throughout the year in Lower Town, St Martin's, Isles of Scilly.

Dawn & Keith Bradford own and personally care for Teania, pronounced 'Tee-ah-knee-ah', and named after their two children, Tean and Tania.

Teania comprises two spacious double or twin bedded rooms on the ground floor, both with en-suite facilities, and a light, conservatory style entrance hall, leading to a hundred square metres of secluded South facing decking with garden furniture and BBQ.

The stunning 180 degree sea and island views from the open plan living area and kitchen on the first floor span from the Eastern Islands, through the main island of St Mary's in the South to the island of Tresco in the West.

The fully equipped kitchen will more than satisfy the demands of contemporary family entertaining or alternatively, enjoy preferential reservations at the highest rated restaurant in Scilly, the Tean Restaurant at St Martin's on the Isle (General Manager - Keith Bradford) where generally demand for tables exceeds supply. Furthermore, you will have priviledged use of the hotel indoor heated pool, and preferential reservations at the Round Island Bar & Bistro.

Long white sandy beaches are within minutes from the cottage.